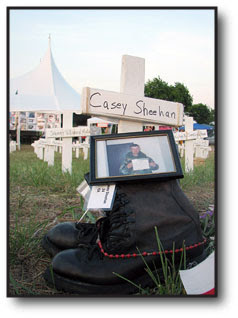 This Saturday on April 04th, my son Casey (and at least 11 other Americans and hundreds of Iraqis) will have been dead for five years. Casey, a humvee mechanic, was killed on 04/04/04 in Sadr City, Baghdad in combat after he had been there for only five days.

Five years have passed in the blink of an eye, and besides missing Casey so much our lives have changed about as dramatically as they could have, as has life of our country.

We just passed the anniversary of the invasion of Iraq with very tepid opposition and President "Change You Can Believe In" is following the path in the Middle East that was blazed by his predecessor, George Bush. Obama’s surge in Afghanistan and on the Afghan/Pakistan border guaran-damn-tees that there will be many more “Caseys” and the people of Afghanistan should not be made subject to more “help” from The Empire.

I collaborated with Bay Area CODEPINK today to call for a protest of Obama’s Afghan Plan and (although an emergency prohibited me from attending) there were not so many people there and no press at all. To be sure, noon on Monday is not the best time, but when I sent out the Emergency Action alert, I was attacked vehemently.

One person wrote: “opposing such a thoughtful and smart President smacks of grandstanding” and another person wrote: “you want Obama to fail, shame on you.” You’re damn right that I want Obama to fail in killing more people and if Obama was so “thoughtful and smart” he would be withdrawing troops from Afghanistan before more of our troops and civilians are slaughtered and the US of A is crushed as have many other Empires crumbled that have tried to subdue the people of that region.

I, and my family made a horrible, horrible (understatement) mistake when Casey joined the military. I will regret until my last breath here on earth not running over him with the car the last time he was home before his deployment just enough to wound him so he couldn’t go to Iraq. Our mistake cost the life of a priceless and irreplaceable family member…Obama is making another mistake (for our class, not his) of historic proportions and I implore you who are reading this: DO NOT ALLOW YOUR SON/DAUGHTER; HUSBAND/WIFE; BROTHER/SISTER, friend or other relation to be killed by the Obama Administration. Dead is dead whether the occupant of the White House has an “R” or a “D” behind his name.

I am ashamed that I gave a son to the Robber Class War Machine, but I am not ashamed to oppose Obama on his foreign policy. Anyone who supports Obama’s adherence to BushCo’s scheme of “More War for More Profit” should be ashamed of him/herself.
I know how it feels to bury a child for the greed and unrepentant sins of The Empire. I also know how it feels to try and live ones life with an un-fillable vacuum and I will continue to do everything I can to oppose Obama’s foreign policy, with or without help and even though people who previously thought wars for profit were wrong until Obama became President attack me as passionately as Bush supporters did and still do.

Whether war supporter, or not: my heart goes out to everyone who has had a loved one killed in U.S. wars of aggression and as always, my heart and apologies go out to people in foreign lands who have unfortunately been born in the way of the trajectory of Empire.

As Martin Luther King, Jr, with whom Casey shares a death date with said: “The greatest purveyor of violence in the world today is my own government.”

Dr. King said this during the height of the Vietnam War and not one thing has “changed”…nothing has changed for the better, but things have become far worse. This was over 40 years ago.

No matter what we in the Robbed Classes do, we cannot make the Robber Class less ravenous for blood and coin, but we can change ourselves and quit allowing our children to be its cannon fodder and paid assassins.

Do it for Casey and his comrades who are unnecessarily dead. Make their deaths “Noble” by not allowing yourself or your child to become another corpse in just a long line of victims of the US of A.