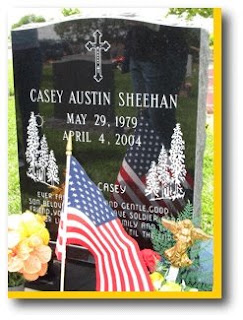 I was on an airplane flying to Orange County from Sacramento to attend the al-Awda Conference; which is a Palestinian Right’s Conference. Al-Awda translates to “The Returning, “ when the Pilot voice filled the cabin to make an announcement that I think went unnoticed by most of my fellow passengers, but I heard it.

As the plane was on the approach to John Wayne airport, the Captain came on the intercom to remind us all to “remember our brave troops who have died for our freedom.” Even in this post 9-11 paranoid paradigm, if I wasn’t belted in for landing, I would have popped out of my seat at 13D and charged up to the cockpit to let the pilot know that my son was killed in Iraq and not one person anywhere in this world is one iota more free because he is dead.

As a matter of fact, the people of Iraq, the foreign country thousands of miles away where my oldest child’s brains, blood, and life seeped into the soil, are not freer, unless one counts being liberated from life, liberty and property being free. If you consider torture and indefinite detention freedom, then the Pilot may have been right, but then again, even if you do consider those crimes freedom, it does not make it so.

Here in America we are definitely not freer because my son died, as a matter of fact, our nation can spy on us and our communications without a warrant or just cause and we can’t even bring a 3.6 ounce bottle of hand cream into an airport or walk through a METAL detector with our shoes on. Even if we do want to exercise our Bill of Rights, we are shoved into pre-designated “free speech” (NewSpeak for; STFU, unless you are well out of the way of what you want to protest and shoved into pens like cattle being led to slaughter) zones and oftentimes brutally treated if you decide you are entitled to “free speech” on every inch of American soil.

If you watch any one of the cable news networks this weekend between doing holiday weekend things, you will be subjected to images of row upon row of white headstones of dead US military lined up in perfect formation in the afterlife as they were in life. Patriotic music will swell and we will be reminded in script font to “Remember our heroes,” or some such BS as that.

Before Casey was killed, a message like that would barely register in my consciousness as I rushed around preparing for Casey’s birthday bar-be-que that became a family tradition since he was born on Memorial Day in 1979. If I had a vision of how Memorial Day and Casey’s birthday would change for my family, I would have fled these violent shores to protect what was mine, not this murderous country’s. Be my guest, look at those headstones with pride or indifference. I look at them, now with horror, regret, pain and a longing for justice.

I can guarantee what you won’t see this holiday weekend are images of the over one million Iraqi dead. Say we assign, in an arbitrary way for purely illustrative purposes, an average height of 5 feet for every person killed in Iraq and then lined those people up from head to toe. That gruesome line would stretch from Los Angeles to Portland, Oregon…950 driving miles up Interstate 5. If we count the Iraqis who have been forced to flee, we would have to go back and forth between L.A. and Portland another four times.

There are obscene amounts of people who have been slaughtered for the US Profit Driven Military Empire who do not count here in America on any day. People in Vietnam are still dying from the toxins dumped on their country by the US, not to mention the millions who died during that war. Let the carnage escalate in Afghanistan while we protect our personal images by turning a blind eye to Obama’s war crimes. Are you going to feel a lump of pride in your bosom when the coffins start to be photographed at Dover for this imperial crime of aggression? Will you look at those flag-draped boxes of the lifeless body of some mother's child and think: "Now, I am free." Is it better to be dead when Obama is president?

A tough, but real, aspect of this all to consider is, how many of the soldiers buried in coffins in military cemeteries killed or tortured innocent people as paid goons for Empire? To me, it is deeply and profoundly sad on so many levels. If I have any consolation through all of this, I learned that my son bravely refused to go on the mission that killed him, but he was literally dragged onto the vehicle and was dead minutes later before he was forced to do something that was against his nature and nurture.

Casey will always be my hero but he was a victim of US Imperialism and his death should bring shame, not pride, as it did not bring freedom to anyone. I will, of course, mourn his senseless death on Memorial Day as I do everyday.

However, we do not need another day here in America to glorify war which enables the Military Industrial Complex to commit its crimes under the black cloak of "Patriotism."

From Palestine to Africa to South America, our quest for global economic domination kills, sickens, maims or oppresses people on a daily basis and about 25,000 children per day die of starvation. I am not okay with these facts and I am not proud of my country.

I will spend my reflective time on MD to mourn not only the deaths of so many people all over the world due to war, but mourn the fact that they are the unseen and uncared for victims of US Empire.
Posted by Cindy Sheehan's Soapbox at 11:25:00 AM