Final Version of the International People's Declaration of Peace (IPDoP) 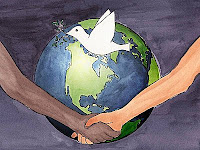 This is the final version of IPDoP...the committee sent it out for translation services.

We are also working on an archival quality hard copy document to be taken all over the world for signatures of leading peace proponents.

We are also working on accompanying articles for the Declaration.

We still need commitments for free or very low cost translation services into:

We the undersigned, as responsible citizens of this planet, hereby proclaim the urgent universal need for sustained security through peace, for present and future generations of the human family.

In order that we all may live and prosper in dignity, we acknowledge the need for a genuine worldwide commitment by all people to break the dehumanizing chains of the savageries of militarism, of economic exploitation, of slaveries, of torture, of killing, and of all aspects of the culture of war and brutality that compromise the very survival of civilization on this planet.

We proclaim that the present geo-political-economic-social system is fundamentally incapable of delivering us from the merchants of war and exploitation and is completely devoid of offering positive, alternative solutions. Thus we come together as brothers and sisters to strive for peace and our collective freedom from violence and other oppressions.

We the undersigned as responsible citizens of this planet do declare:

First and foremost, the intrinsic value of each and every human being, is equal, regardless of: race, skin color, religion, gender, sexual orientation, marital status, age, or national origin;

Even though we are individuals with both unique talents and needs, we are also united in the community of humanity;

Enslavement to The Establishment by military service is never an option whether it is for economic reasons or patriotic fervor. We will actively resist for ourselves and/or for our children, as far as humanly possible, enlistment or forcible conscription into the armed services of our nations;

The root of all war is profit and we will not allow the war profiteers to own our labor or steal the fruits of that labor to be used solely for their greed of power and money;

The insidious and uninterrupted preparations for war, along with the act(s) of war, are major environmental destroyers of this planet. In contrast, we will do all we are able within our families and communities to protect all life, conserve natural resources and, as far as possible, utilize sustainable and renewable forms of energy;

We will boycott news sources that promote war, division and/or oppression. We will not buy into the culture of violence that is promoted by movies, video games, television programming, music, toys or other popular culture;

We will remove ourselves as far as ideologically possible from our governments when unjust war is proposed, propagated, or conceived of in any other way;

We will actively and courageously protest against wars, violence and economic oppression no matter who, or what, rule our nations;

We will proclaim to our nations, families, friends, co-workers, neighbors and others that using violence to solve problems is a disordered and barbaric choice. Except for legitimate and justified self-defense (as a last resort), we refuse to use violence in our own lives and will explore with our children and communities many approaches to peaceful conflict resolution.

War is the unspeakably evil pursuit of The Establishment of this planet. Wars of aggression are inherently war crimes and crimes against humanity. We the people of the world suffer while The Establishment grows wealthy from our sweat and blood.

As a first step to breaking the cruel bonds that most governments hold over us, we firmly declare that peace is the moral imperative and we reject violence in all forms: from personal to state-sanctioned violence.

Since most wars are not the will of the people and are brought on by the will of governments, at the behest of war profiteers, we firmly and with the highest conviction, state, that WE are not enemies to each other and we will stand in solidarity to Declare Peace with the entire planet.

We, the Undersigned of this Declaration of Peace, agree to help each other break those bonds of violence and oppression and affirm our resolve to never again raise a clenched fist of violence against one another. Instead, we will join hands to lead this planet on the path of reconciliation, healing and peace.