The Audacity of Israel by Cindy Sheehan 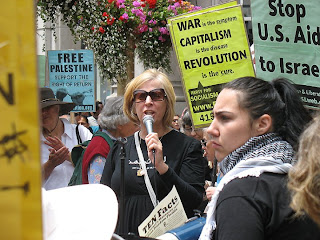 “Until all of Gaza is destroyed the job is not done.”

Words on a sign of a Zionist in San Francisco

Since my son was killed in Iraq and I have come to prominence in the peace movement, the name I am called with the second highest frequency (behind “anti-American”) is “anti-Semitic.’

First of all, isn’t it interesting if one is anti-violence and pro-peace, that automatically makes one anti-American and anti-Semitic? That just tells us that violence and oppression are so inherently institutionalized in our cultures, that if one is against these things, that makes one against the entire culture, race or way of life.

It should be fundamentally understood that criticism of Israel’s program of Palestinian pogrom and the US’s demented foreign policy is not to be construed as hatred of all Jews or all Americans.

Here it should be pointed out that many Jews criticize Israel’s policies, in Israel and abroad, and are immediately branded as: “Self-loathing Jews.” I remember when I first met Pentagon Paper’s, whistle-blower, Daniel Ellsberg, and he was going off on Israel and its policies. I interrupted him and teased him: “Why Daniel, are you a self-loathing Jew?” And he responded: “No, I am a Likkud (rabid Zionist Israeli political party) and Sharon (Ariel Sharon, former terrorist and prime minister of Israel) hating Jew.”

This past Sunday evening, (May 30th), I was sitting at my home in California having a cookout with my surviving children and grandchildren because we were commemorating Casey’s birthday (Memorial Day and Casey’s birthday always and unfortunately coincide) when I received a call from a friend and colleague who informed me that the Free Gaza Freedom Flotilla was under attack in International Waters by IDF (Israeli Defense Force) commandoes. Immediately, because of previous Israeli crimes against the Free Gaza humanitarians—ramming and firing at the boats and arresting and illegally detaining the participants—my gut reaction was the worst-case scenario. Minutes after I knew what happened, I knew that Israel would turn out to be the aggressor and, once again, justify its crimes with lies and cries of “self-defense.”

Israel’s claims of self-defense are usually delusional and paranoid. It would be like me claiming self-defense if I killed a homeless person for asking me for spare change.

Although all life is precious and all loss of life mourned, these facts should shame anyone who has cried “self-defense.”

· The US provides about 10 million dollars per day in military and other aid to Israel and ZERO dollars a day to Palestine.

(These stats are from www.ifamericansknew.org)

I also want to make clear, and I think I speak for many people in the peace community, that, as well as not being a “Jew hater”--I am not a Holocaust denier. How can one not look at the images from the concentration camps and hear the stories without being instantly and deeply moved and repulsed? How can one deny the overwhelming evidence that it did happen and that it was an immense tragedy to, not only Jews, but Catholics, gypsies, homosexuals, political prisoners, and many other fringe groups that Nazi Germany persecuted? But, saying that, in my opinion, what happened to the Jews during the 30s and 40s does not justify in the least little bit what the Jewish State of Israel has been doing to the Palestinian people since 1947. One-genocide does not justify another, especially since the Palestinian people had nothing to do with the Holocaust and any person of conscience or any basic intelligence must realize that the Palestinians have been forced to suffer for decades for the crimes of white Europeans.

I have been impressed by the protests that have arisen all over the world in response to this crime, but even though the latest Israeli atrocity was horrible, people of Palestine, Iraq and Afghanistan go through this on a daily basis, and we have trouble raising interest for anti-war protests.

We here in the U.S. need to demand that our tax dollars stop going to help Israel violently occupy Palestine and help Israel be a major destabilization force in the region, but we also need to look at our own complicity. What good does it do to go to an occasional protest and hold signs, no matter how clever they are, but still finance our country’s war crimes and crimes against humanity by paying our own pound of flesh to the Empire?

Peace of the Action will address this issue as well as the Gusher in the Gulf, drone bombings and military recruitment this July in our Sizzlin’ Summer Protests.