The United Rogue States of America by Cindy Sheehan 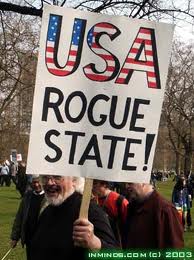 (The USA is the) most dangerous power the world has ever known - the authentic rogue state, but a rogue state of colossal military and economic might. Nobel Literature Laureate; Harold Pintar, 2001
As Khujeci Tomai put it, “Dead men tell no tales. They cannot stand trial. They cannot name the people who helped them stay in power. All secrets die with them.”
Dictionary.com defines a Rogue State as: “—n a state that conducts its policy in a dangerously unpredictable way, disregarding international law or diplomacy.” Especially since 9/11, according to this definition, the USA has sunk to the level of Rogue State. 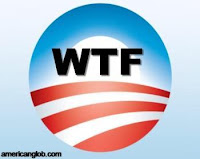 Wow, I thought Bush was bad and that we had sunk about as low as we could go during those insane years, but Obama is excavating new territory.
Just since the Occupy movement began, the Obama regime has (among other things): 1) assassinated several US citizens in Yemen,  (without due process) including a 16 year old having dinner with his buddies; 2) Sent “advisors” to Vietnam (oops, I meant Uganda; 3) aided and abetted the assassination of a leader of a sovereign state.
Not a bad month for a Rogue President still in his first term, eh?
After the assassination of Qaddafi, at least two interesting things came to my awareness—the first one was the Rogue Libyan ambassador to the US telling our own Rogue news commentator, Wolf Blitzer, that the “rebels” were so happy that the US paid at least two billion dollars for the overthrow of Qaddafi. The second one was a tweet from the OWS movement the day Qaddafi was assassinated that said, “Congrats Libya! Your struggles against the #Gadhafi regime is (sic) over. Let's hope for a bright future #solidarity.”
Okay, let’s deconstruct and connect these two events.
First of all, Ambassador Ali Aujali was absolutely gloating and so ecstatic that Qaddafi was executed because it was “better” for Aujali that he not be captured and brought to trial—those were unexpected true words from the Robber Class--since dead men can tell no tales. In all his bloodthirsty glory Wolf, who has at last, dropped all pretenses at being a journalist, was also beaming with glee that Qaddafi was slaughtered (also without due process).
During that interview, Wolf did ask Aujali about the chances of the “rebels” paying the US back for the literal blood money taxpayers paid for this criminal regime change. Aujali demurred.
Then the tweet from the OWS movement came to my attention, showing a profound shallowness of comprehension on its part.
The “people” of Libya did not, I repeat, did not, rise up against Qaddafi. While I am sure that there were some well-meaning individuals who wanted to see the end of the Qaddafi regime, it was more like the two billion from the US funny money mint and over 26,000 US/NATO bombing raids that killed unknown thousands of innocent Libyans that actually accomplished that feat.
How can the “struggle” of the people be over if the new government is flying the flag of the deposed and oppressive former monarchy and dividing up the spoils of blood-soaked victory between various foreign oil companies? I really wish the Occupy Wall Street movement would think harder before it parrots the propaganda of the establishment. Even though I am a member of the 99%, that kind of language does not speak for me.
Remember, way back in March when I denounced the UN “no-fly zone,” because I said that was code for, “bombing civilians?” Many people accused me of “not caring about the people of Libya,” but it appears that I was tragically correct.
Yes, Wall Street is a big problem and Obama is, once again, raking in all the ill-gotten gains from donors from there as he can. But does anyone reading this have any better ideas for ways that the US can spend two billion dollars rather than killing civilians, deposing leaders, and propping up puppet governments that will be friendly to big oil? If the war issues are not addressed in a more meaningful and comprehensive way, then I am afraid the movement has every chance of being neutralized. What happens if Geithner and Bernanke are “indicted,” and the crazy-empire train keeps chugging along?
Our Rogue State is clearly out of control and, as I have said many times, economic and social justice just are not possible without complete and unconditional peace.
Posted by Cindy Sheehan's Soapbox at 11:21:00 AM