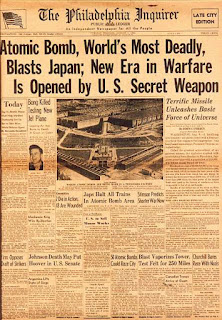 “From the very concept of strategic bombing, all the developments -- night, pattern, saturation, area, indiscriminate -- have led straight to Hiroshima, and Hiroshima was, and was intended to be, almost pure Schrecklichkeit [terror bombing].”
- Life magazine, summing up Allied bombing tactics (August 1945)

At 11 o’clock on the morning of Aug. 9, 1945, Prime Minister Kintaro Suzuki told the Japanese Cabinet that Japan’s “only alternative” was to accept the Allied peace terms and “terminate the war.”

Minutes later, the Home of the Brave™ dropped a second atomic bomb on the Japanese city of Nagasaki.

Afterwards, novelist Zora Neale Hurston, called Truman a “monster,” adding, “I can think of him as nothing else but the Butcher of Asia,” and even U.S. Admiral William D. Leahy characterized the atom bombs as “an inhuman weapon to use on a people that was already defeated and ready to surrender.”

If the Hiroshima bombing was pure Schrecklichkeit, who then could explain the purpose of bombing Nagasaki three days later?

Here are the thoughts of three historians who have tried:

“The psychological effect on Stalin was twofold,” proposed Charles L. Mee, Jr. “The Americans had not only used a doomsday machine; they had used it when, as Stalin knew, it was not militarily necessary. It was this last chilling fact that doubtless made the greatest impression on the Russians.”

“The dropping of the second bomb on Nagasaki seems to have been scheduled in advance and no one has ever explained why it was dropped,” wrote Howard Zinn. “Was it because this was a plutonium bomb whereas the Hiroshima bomb was a uranium bomb? Were the dead and irradiated of Nagasaki victim of a scientific experiment?”

“Humanity had been forced to witness enormous destruction all through World War II,” declared Michael C.C. Adams, in The Best War Ever: America and World War II. “By 1945, the killing had reached such enormous proportions that the bombing of one more city did not have the aspect of moral horror that it might have now. In such a time of death, the unimaginable had become acceptable.”
Indeed, the nuclear floodgates were wide open…

Shortly after the devastation of Nagasaki, researchers set about -- at any cost -- to discern the effects of plutonium on the human body. “In experiments worthy of Dr. Mengele,” wrote Jack Bradigan Spula in Lies of Our Times, “these researchers chose unwitting patients who were not expected to live long anyway.”

“There were two kinds of experiments,” wrote Peter Montague, director of the Environmental Research Foundation. “In one kind, specific small groups (African-American prisoners, mentally retarded children, and others) were induced, by money or by verbal subterfuge, to submit to irradiation of one kind or another. In all, some 800 individuals participated in these ‘guinea pig’ trials. In the second kind, large civilian populations were exposed to intentional releases of radioactive isotopes into the atmosphere.”

Reminder: The men -- and yes, it’s always men… it’s Male Pattern Violence -- responsible for this radioactive rampage are commonly referred to as this country’s “greatest generation.”

Never forget, comrades, this is what we’re up against.

Mickey Z. is the author of 12 books, most recently Occupy this Book: Mickey Z. on Activism. Until the laws are changed or the power runs out, he can be found on the Web here and here. Anyone wishing to support his activist efforts can do so by making a donation here.

"Nagasaki: The Unimaginable Had Become Acceptable" by Mickey Z. is licensed under a Creative Commons Attribution-ShareAlike 4.0 International License.

Based on a work at http://worldnewstrust.com/nagasaki-the-unimaginable-had-become-acceptable-mickey-z.