A Century of Fighting Fascism with Socialism by GUEST AUTHOR, Matt Owens 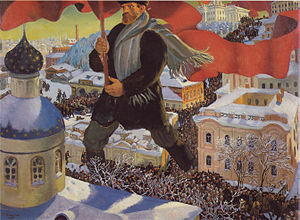 The Bolshevik
A century of fighting fascism with socialism:
what is to be done?

M.K. Owen, California
Socialist League/Liga Socialista de California.
***********************************
On November 7 we celebrate the October Socialist Revolution which, one hundred years ago, overthrew not only the last in a series of Russian Provisional Governments, but the capitalist class on whose behalf it continued to wage, and lose, the First World War: what can we learn from it and from what became of the state to which it gave birth?

The first thing to note is that it did put an end to capitalism on most of the territory of the Russian state: because it did not expand into Germany and beyond, it retained its fundamentally Russian character, despite Lenin's campaign to break up Russia, resulting in the alienation of one-third of its territory from Russia to found a multinational Union of Soviet Socialist Republics (Lenin wanted to go further, but Stalin, the Commissar of Nationalities, wielded his power as General Secretary of the Communist Party to fight Lenin to a standstill).

The Civil War killed off the original Russian proletariat, forcing the Bolsheviks to work amongst the peasantry to industrialise Russia, then the USSR: this forced the Bolsheviks to rely on the Soviet state bureaucracy and peasant initiatives to rebuild the Soviet economy...a retreat into capitalism for which Lenin honestly campaigned, correctly labeling it as such.

This “New Economic Policy” succeeded in rebuilding the Soviet economy, but could not grow it in the face of the Great Depression: Stalin, having already used Trotsky's scepticism of the NEP to turn the Communist Party against him, now turned against the NEP without acknowledging Trotsky's earlier critique...instead Stalin put the entire Soviet economy in the hands of the bureaucracy, relying on the employer-employee relation of production historically specific to capitalism to cement his rule over the CPSU, and its rule over the Soviets. Marx and Engels had predicted that Ferdinand Lassalle's state socialism opened the door to this kind of despotism...and Stalin, empowered by the failure of the Soviets to expand beyond the territory of the Russian Empire, walked through that door. The stupendous contradictions between the Soviets' democratic origins and bureaucratic destiny continued to dog the USSR until its demise in 1991, paving the way for open, honestly capitalist governments ever since.

The socialist revolutions which led up to the Soviet Revolution of 1917 were produced by extreme crisis: military defeat resulted in the Paris Commune of 1870-71,  the first Soviets of 1905, and  the Socialist Revolution of 1917. All were the products of general strikes, which necessitated the meeting of workers' deputies to democratically plan their economies. This began also to happen in Germany as a result of the hyperinflation of 1923, but when it did, the minty-new German Communist Party, anxious to preserve its United Front with the governing Social Democrats, hesitated, and the German Soviets were dissolved, welding the fate of the Soviets to that of Russia, limiting Communist rule to a country and a class to whom their ideas were utterly alien rather than commonsense.

The socialist revolutions have always been inherently anti-fascist: The Paris Commune closed the door on the return of the Bonapartes to power; the Soviets defended the Revolution against the Kornilov putsch, as did their German comrades against that of Kapp; and we all know what became of Germany once the German Soviets were defeated.

How different 21st Century socialism is from its predecessors! It began with a failed insurrection in Venezuela, the “Caracazo,” which a cadre of paratroopers led by Lt. Colonel Hugo Chavez Frias tried to rescue. In 1998, Chavez ran for president and was victorious with the largest margin since the early 1960s.

President Chavez immediately promulgated a Constitution to meet the demands of the Caracazo, and launched the Social Missions to bypass the bureaucracy in order to deliver oil revenues directly to the Venezuelan people.

The achievements of the Social Missions were as remarkable as those of the Soviets; illiteracy was eliminated, healthcare was delivered to all Venezuelans, and the work of alleviating the effects of the poverty in the barrios and indigenous communities was begun...

...Yet Chavez correctly pointed out that, while many in the capitalist world regarded his government and its policies as socialist, they were no such thing, as they didn't address the question which befuddled the Soviets, that is, relations of production: hence he led his MVR party into a specifically socialist coalition, PSUV,  and from that platform, launched the Communal Councils, which, in turn, combined into Communes in order to organise a specifically socialist economy based on democratic planning...

That socialist project, launched in a capitalist country, has been besieged by domestic and international capitalists and their states from the outset: the result has been sanctions, shortages, and currency collapse, much as confronted the Soviet Union, as well as Germany in 1923. Can Venezuela succeed where the USSR could not, and can socialism triumph as it did not in Germany?

Here we confront the same problem as Marx did, that of the collective capitalist: even if a cooperative or government is in the hands of the workers, it can be forced into the same relation of production with them as is any individual capitalist: capitalism without capitalists, as it were. It was this fate which befell the Soviet Union, that that which awaits Venezuela even if Venezuelan workers overthrow domestic Venezuelan capitalists and fascists...

...Unless the 21st Century Socialist Revolution grows beyond Venezuela! Think of how different things would have turned out if Germany had joined the Soviet Union, which it almost did in October of 1923 (the date the German government set as the deadline for the German Soviets to disband). Hitler still merely a postcard-painter, Stalin a mere bureaucrat in a Russian bureaucracy fast fading in a Soviet Union which now included a German SFSR, led by a CPSU also including cadres drawn from the German proletariat!

Think of the possibilities if 21st Century socialism expands beyond Venezuela! Rojava showed some promise, but its leadership has been diverted into CIA's struggle to overthrow the Syrian government; Catalunya may have to travel the socialist road to independence via a general strike, especially promising if that strike spreads to Castilian Spain and Euzkadi, the Basque Country...

...And now California! The same abrogation of autonomy which drove the Catalans to declare independence, and which drove us to declare independence from the despotism of Antonio Lopez de Santa Ana in 1836,  is now again upon us, as we defend all the gains workers made in the US against the rapacious Trump/Pence regime: some think that the return of the Democrats to power would end that nightmare, but it didn't end when they were in power, and it won't if they return.

Will the US drive California away the way Spain did Catalunya? Can either succeed in winning their independence except through a general strike and socialist revolution?
That is the question before us: socialist revolution doesn't happen until everything else is tried first, and fails. We of the California Socialist League are preparing for it.