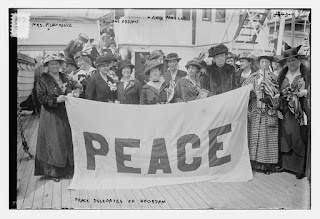 There is one thing missing from  the upcoming Women’s March publicity and philosophy: the urgent need for Peace not War!

The March will speak out against hate, discrimination and exploitation. That’s good.

The March will also speak out strongly in favor of equality, women’s reproductive choice and respect for all people regardless to disability, gender, orientation, etc.. That’s also good.

But the subject of US military aggression and war is essential. We hope that many marchers will include this in their signage and discussions.  Despite many antiwar groups and individuals actively advocating for “peace” to be in the platform/demands of the March, this is the second year peace is being minimized or ignored by the organizers.

For the past century the US has intervened aggressively against governments the Washington establishment does not like. A partial list includes Philippines, Korea, Guatemala, Iran, Cuba, Chile, Vietnam,Angola, Nicaragua, El Salvador, Panama, Somalia,  Haiti, Afghanistan, Iraq, Venezuela, Honduras,  Libya and Syria!

These acts of “regime change”  have killed millions of people including many thousands of our own youth, both women and men. They have resulted in hundreds of thousands returning home injured physically or psychologically. Mothers, wives, sisters, aunts, and other family and friends have been profoundly, permanently, and unnecessarily handed a lifetime of pain and sorrow because of the US war machine.

Shouldn’t it be a priority to change the policies and acts of economic aggression and military intervention that result in violence, war and destruction?

Shouldn’t we address the causes of the refugee crisis as well as the symptom? After all, most refugees never wanted to leave their homelands.

We are sure that most of the women and allies who will be attending the Women’s March agree with us on the need for action and protest against our ongoing wars.

The escalating military budget is driving our country further and further into debt. Meanwhile infrastructure is decaying, health care and housing is diminishing and education is underfunded. College students now graduate with astronomical student debt. Meanwhile there is growing police oppression.

We must include PEACE in our march because unless we can stop the trend, a nuclear war is going to destroy civilization.  There is no such thing as a winnable nuclear war. Resisting the war machine and dismantling ALL nukes should be essential elements in our activism. The continuity of human life on our planet is at stake. These are Women's issues.

The demand for "peace, not war" should be integral to the Women’s March.

* Cindy Sheehan is the mother of Specialist Casey Sheehan who was killed in Iraq in 2004; she is an antiwar activist, author of seven books, Executive Producer and host of Cindy Sheehan's Soapbox.

* Rick Sterling is an investigative journalist.