— from RAY LIGHT and CINDY SHEEHAN —

We are encouraged that tens of thousands of high school youth left their schools and took to the streets to protest the fact that, even in school, our youth, holding the future of our country in their hands, are not safe from an epidemic of violence that is sweeping across the USA. The youth are finally beginning to get the message, the wisdom, that  Martin Luther King, Jr.  had come to realize and courageously shared in the year before his assassination fifty years ago: “the greatest purveyor of violence in the world  today [is] my own government.” (MLK Speech at Riverside Church, April 4, 1967)

Reverend Billy Graham passed away on February 21, 2018 and was immediately deified and lauded as a “hero” by the U.S. corporate media.  Let us be clear on Graham’s legacy: the only gospel Graham followed was that of war, hate, and unfettered capitalism. It is absolutely undeniable that Graham played this role for the irredeemably corrupt and bloodthirsty machine of U.S. imperialism. And he played it for well over half a century.

The Current State of U.S. Society
and of the U.S. Empire’s Government

The first quarter of 2018 has brought much political turbulence and disruption both to the rulers and the ruled in the USA. Because U.S. imperialism is still the main bulwark of world capitalism, what has been going on in the USA these days has real significance for the international proletariat and the oppressed peoples of the world, as well.

The U.S. Labor Movement:
The 2017 AFL-CIO Convention and Beyond

Attended by approximately 600 delegates representing fifty-six national unions as well as a number of State AFL-CIO Federations and Local Central labor bodies, the 2017 Constitutional Convention of the AFL-CIO convened in St Louis, MO from October 22-26. The AFL-CIO is the largest U.S. federation of trade unions, claiming to represent some 12 million “organized” workers. The convention is held every four years and sets the direction of the Federation for the coming years and elects the top three positions of leadership of the organization. 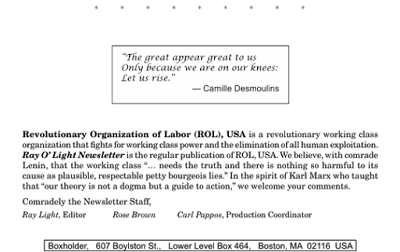