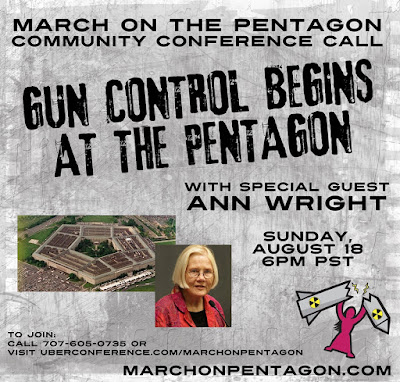 Gun Control Begins at the Pentagon

for our montly Community Conference Call

Our topic will be the phenomenon of gun violence
in the USA domestically tied in with the overwhelming
violence displayed by the U.S. war machine around the world on a daily basis.

*Ann Wright is a Colonel (Ret) in the Army Reserves and
a retired diplomat from the U.S. Department of State.

Ann travels the world connecting with other activists to
try to end this military madness.

From her Wiki page:

"She received the State Department Award for Heroism in 1997, after helping to evacuate several thousand people during the civil war in Sierra Leone. She is most noted for having been one of three State Department officials to publicly resign in direct protest of the 2003 Invasion of Iraq. "

CLICK ON #BadAssBillie for more information on
March on the Pentagon