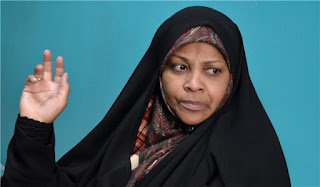 For this Special Edition of The Soapbox, Cindy connects
with PressTv journalist Marzieh Hashemi.

Marzieh is US-born now living in Iran and she is a journalist with PressTv. Last year, Marzieh was kidnapped by the FBI while visiting her family in the US. She was illegally detained without charges but, with her human and religious rights routinely violated. Eight days after her abduction, she was released.

Cindy and Marzieh chat about the current situation in Iran--this is a very important discussion for those who are seeking real news.


Freedom Rider: Iran and the Need for Black Activism

Freedom Rider: Iran and the Need for Black Activism

Black Americans, as perpetual targets of US lies and attacks, should be the first to reject Washington’s rationales for war with Iran.

“The days of outspoken progressives in the Congressional Black Caucus are long gone.”

Even the most disparaging Donald Trump critic, such as this columnist, can still be shocked by the president’s rash behavior and inexplicable decision making. Such was the case when Trump ordered the assassination of Iranian Quds general Qassem Soleimani and Abd Mahdi al-Muhandis, commander of the Iraqi Popular Mobilization Forces.

The drone attack in Baghdad killed the two men and eight others. The United States was well aware that Soleimani was on a diplomatic mission. His goal was to start an Iraqi brokered peace process between Iran and Saudi Arabia. But he was set up by the U.S. and Israel like the victim of a mafia hit job. Of course, U.S. foreign policy is always very gangsterish.

The mood in the nation has been grim ever since this story broke. Fears of World War III and terror attacks came to mind for most people. Anti-war groups had struggled to gather large numbers of people but within two days more than 80 actions took place in 38 states. That achievement should be tempered by memories of 2003, when hundreds of thousands protested the invasion of Iraq, but quieted their stance in order to get a pro-war Democrat elected in 2004. In 2008 they lost all common sense when a smooth talker was successfully marketed as a peace candidate.

“Soleimani was set up like the victim of a mafia hit job.”

The corporate media parrot every word coming from the Trump White House and State Department. People who never heard of Soleimani are now convinced that he killed American soldiers. Of course the claim is a lie as is every statement emanating from what Iranians refer to as the Great Satan.

And what of black America in this moment? We have been reduced to producing social media memes begging Iran not to harm us. We harken back to the seizure of the United States embassy in Teheran and the decision to free the black hostages in 1979. Ayatollah Khomenei correctly stated , “...blacks for a long time have lived under oppression and pressure in America.”

For most of American history black people could be counted on to oppose United States war making abroad. If no one else spoke up in defense of countries declared enemies, we would. Posturing about strategic interests, the Cold War or the War on Terror brought sneers and disbelief even as the rest of the country swallowed lies and supported aggression.

“If no one else spoke up in defense of countries declared enemies, we would.”

But that was before a black secretary of state, Colin Powell, told very big lies and made the case for the invasion of Iraq. The black face in the high place had credibility no white man would have. Otherwise intelligent people suddenly made excuses for conduct they would never have accepted in the past.

Even worse, a black man would be president. When Barack Obama destroyed Libya and killed its leader, the people who once spoke up in protest were suddenly silent.
Donald Trump has no such support. He is seen as an existential threat to black people and is dismissed and despised. But the damage has been done and black politics has been effectively neutered. The days of outspoken progressives in the Congressional Black Caucus are long gone and we are left with useless drivel about Trump asking permission to go to war.

It is heartening that thousands of people turned out on short notice to demand that the U.S. cease its aggressions against Iran and finally leave Iraq. But the absence of fundamental opposition to American aggression leaves that movement prone to repeating the mistakes of the past.
The enemies of peace are many and powerful. The corporate media work hand in hand with the duopoly to convince Americans that war is peace and freedom is slavery. Black misleaders and well paid pundits are supported at every turn while truth tellers struggle to be heard. CBC members are rightly afraid of facing well funded opponents if they end up in Zionist lobby crosshairs.

The people must be independent of all these forces. The common sense forged by the common experience of oppression must be resurrected. If no one else reacts with revulsion and anger at the next Trump act of aggression, we must. We can’t wait for the CBC or others designated as leaders. When Ayatollah Khomeini freed the black hostages we all applauded and with good reason. We knew he was telling the truth about our history. If we are going to remember anything about Iran let it be that moment.

Margaret Kimberley’s Freedom Rider column appears weekly in BAR, and is widely reprinted elsewhere. She maintains a frequently updated blog as well at patreon.com/margaretkimberley and she regularly posts on Twitter @freedomrideblog. Ms. Kimberley lives in New York City, and can be reached via e-Mail at Margaret.Kimberley(at)BlackAgendaReport.com.
COMMENTS?

Please join the conversation on Black Agenda Report's Facebook page at http://facebook.com/blackagendareport
Or, you can comment by emailing us at comments@blackagendareport.com