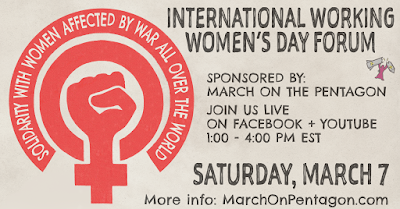 WELCOME: WOMEN, MOTHERS AND US IMPERIALISM
Cindy is the Gold Star Mother of Casey Sheehan, who was killed in Iraq on April 4th 2004. Cindy has been involved in the peace and social justice movement ever since. She is currently on the board of Directors of Women's March on the Pentagon and Producer/Host of Cindy Sheehan's Soapbox. In 2005, Cindy set up camp outside of President George W. Bush's Texas ranch, demanding a meeting with the president in hopes of receiving an explanation for her son's death. Cindy was also a vocal critic of President Barack Obama's foreign policy. Cindy lives near her surviving children and is the proud "Gigi" of her five grandchildren.

WOMEN OF YEMEN AND SYRIA UNDER US IMPERIALISM
Randi Nord is a MintPress News staff writer. She is also co-founder of Geopolitics Alert where she covers U.S. foreign policy in the Middle East with a special focus on Yemen.

WOMEN AND ALTERNATIVE ELECTORAL POLITICS UNDER US IMPERIALISM
Madelyn was Executive Director of the Grass Roots Environmental Organization (GREO) from 1983-98 where she worked with grassroots citizen groups and communities in New Jersey to clean toxic chemical pollution and oppose new polluting facilities. From 2000-18, she was Executive Director of a now 61 year old grassroots peace organization, working to end and prevent war and to move money from the war budget into needed programs. Since June, Madelyn has worked with the Green Party of New Jersey on an agenda that combines work for a clean environment with work for peace.

She is an adjunct professor of political science and public speaking and has traveled as a peacemaker to:
Afghanistan
Palestine
Tunisia
Hiroshima and Nagasaki
Syria
Colombia
Venezuela

Diane is an activist and an attorney. As a member of the Green Party of New Jersey, she is in a state leadership capacity on the Green Council. She embraces the Green Party platform of people, planet, and peace over profit. Diane was a legal services attorney in Newark, NJ for over 14 years. She has been involved with activism in New Jersey and across the country, including getting money out of politics, fighting pipelines and fossil fuels, advocating for healthcare for all, fighting for immigrants’ rights and economic justice. She has stood against racism, imperialism, the military industrial complex, mass incarceration, and more. Diane currently organizes with Extinction Rebellion (with a focus on environmental justice communities) and The Peace Congress in NJ. She is on the Board of Directors of the March on the Pentagon. She is also a member of the U.S. Peace Council, as well as member of Socialist Party.

LISA DAVIS:
WOMEN AND BLACK LIBERATION UNDER US IMPERIALISM

Lisa Davis is a long time strong community activist in NJ who has been passionately committed to the Black Liberation Struggle for over 30 years. She started out at the age of 19 being the youngest person ever elected to serve on the Democratic County committee in her hometown, but soon found a stronger and truer voice in the grassroots movement of the people’s struggles and has made a conscientious choice to stand with the people ever since. From being actively involved in the struggle to end apartheid, to fighting to end police brutality and stop and frisk, Lisa vows to remain committed to the struggles of oppressed people everywhere.
Today she is a member of the People's Organization for Progress, the vice-chair of the Black is Back Coalition (BIBC) and chair of its Healthcare Working Group, which is tasked with the mission of establishing an advocacy network of revolutionary people who are involved in healthcare, be it naturopathic or allopathic, and who are committed to challenging the paradigm of this current racist, for profit, medical system. And whereas she commends the Black Liberation Struggle for being on the forefront of fighting against the abuses of a racist judicial and law enforcement society, she is adamant that we must become equally as vocal about the devastating effects of structural racism in medicine.

EMMA (FIALA) SRON:
WOMEN AND THE COMMUNITY UNDER US IMPERIALISM

Emma is an activist, documentary photographer, mom of two, and independent journalist. She is on the board of Women Against Military Madness. Emma is an editorial assistant at MintPress News and a journalist and editor at The Mind Unleashed. Her articles have been featured on MintPress, the Anti-Media, Zero Hedge, the Mind Unleashed and Media Roots. She previously interned with Empire Files with Abby Martin, visited Standing Rock, and organized a grassroots rescue effort in Texas after Hurricane Harvey. Emma lives in Minnesota where she frequently participates in and photographs local protests and actions. She is MOP's webmaster and social media guru as well as on the Executive Board.

SUE ANN MARTINSON:
WOMEN AND THE ENVIRONMENT UNDER US IMPERIALISM 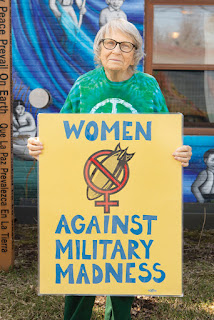 Sue Ann
Sue Ann Martinson has participated in antiwar/pro-peace activity over the years with the Honeywell Project, Alliant Action, Veterans for Peace and as a long-time member of Women Against Military Madness. In she was part of Stop the Reroute (of Highway 55) and Save Coldwater Springs, organized with young activists and the Mendota Dakota Mdewakanton Community. A writer and editor, her latest peace and justice activities center around publishing a blog, Rise Up Times, Media for Justice and Peace, that focuses on the media and militarism, while posting timely news analysis about climate crisis and the environment, racism, and the many current issues that require activism in this Rise Up Times. While RiseUpTimes.org focuses on in-depth articles and commentary, on her personal Facebook page she posts local events and petitions about many issues. Her interest in the environment goes back many years to before we understood the effects of climate change, when she published an article in the WAMM Newsletter about the devastation of the environment being as great a threat to the future of the planet as nuclear war.

MNAR MUHAWESH:
WOMEN IN PALESTINE UNDER US IMPERIALISM and ISRAELI COLONIALISM
Mnar is founder, CEO and editor in chief of MintPress News, and is also a regular speaker on responsible journalism, sexism, and neoconservativism within the media. Mnar spent time living in Palestine as a child. She began her career as an independent multimedia journalist covering Midwest and national politics while focusing on civil liberties and social justice issues. In 2009, Mnar became the first American woman to wear the hijab to anchor/report the news in American media.

LUCY PAGOADA-QUESADA:
WOMEN IN LATIN AMERICA UNDER US IMPERIALISM and SANCTIONS
Lucy Pagoada-Quesada, is the mother of a teenage son, a New York City Department of Education High School Teacher, Human Rights defender, political and social activist. She is also the official Coordinator of The LIBRE Party, USA-Canada, which is the political Arm of the Honduran Resistance, coordinated in Honduras by President Manuel Zelaya, overthrown from power via a US military backed coup in 2009, under the administration of president Barack Obama and his Secretary of State of State Hillary Clinton. Lucy is a host of the Radio Program "Voices of Resistance" at WBAI, 99.5 FM, NY.

JESSICA SWIM:
WOMEN AND ORGANIZING AGAINST US IMEPRIALISM

F.U.R.I.E.
Jessica lives in Chicago where she organizes with local political group and Women's March on the Pentagon sponsor, Feminist Uprising to Resist Inequality and Exploitation (FURIE). Jessica is also a head editor and contributor to FURIE's literary journal, The PanWomanist.

SPONSORED BY MARCH ON THE PENTAGON

PLEASE CLICK BADASS BILLIE TO DONATE TO OUR CAUSE