CINDY SHEEHAN ON VOICES FOR NATURE AND PEACE (INTERVIEW OF CINDY) 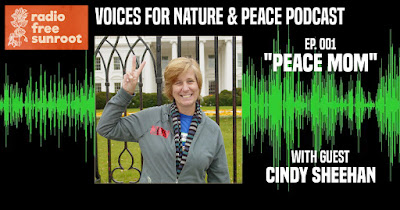 Cindy Sheehan is an anti-war activist and an anti-imperialist rabble-rouser. She became politically active after her son, a soldier, was killed in Iraq in April 2005. Shortly thereafter she formed Gold Star Families for Peace, made up of other families who opposed US militarism. She became nationally-known in August of 2005 after establishing a protest camp near President George W. Bush’s ranch in Texas. Hundreds of people participated in the protest, which was called “Camp Casey” after Sheehan’s son. At this time, the media nicknamed her “Peace Mom.”

Sheehan has run for office three times, including against Congressman Nancy Pelosi. She rejects the US American political duopoly and is a member of the Peace and Freedom Party. In 2018, she formed the Women’s March On the Pentagon, which has been organizing an annual emonstration against war and imperialism at the Pentagon in Washington DC. She has been arrested multiple times for protesting.

Sheehan has authored eight books including “Dear President Bush,” “The Obama Files: Chronicles of an Award-Winning War Criminal” and “Myth America:10 Greatest Myths of the Robber Class and the Case for Revolution!”

She also publishes a blog and produces a podcast at Cindy Sheehan’s Soapbox, with new content every week.

In our conversation, recorded on March 3rd, 2020, we talked about antiwar activism, US imperialism, the futility of electoral politics, the environmental crimes of the US military, how propaganda supports war, how political organizing is affected by technology and social media, and other topics. It was a real honor to speak with her.