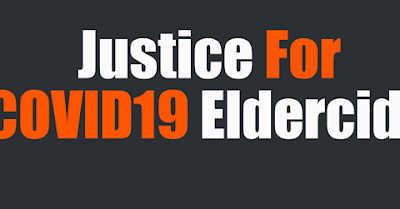 "Your Government Wants to Murder You"

"I agree with Vernon Coleman that this policy was deliberate "saving billions in healthcare costs and pensions." Remember when we were told that schools have to be shut down and that we had to isolate because we needed to protect the "elderly and ill" a lot of people in care homes are both elderly and ill.

So, the patients put in care homes with corona was what Vernon Coleman calls an "essential part of the covid crime, murdering as many elderly as possible."

Even if you believe all the hype and fearporn about Covid-19, this is eldercide and these governors and others MUST be held accountable."


Youtube removed the above video, but you can watch it here:
Your Government Wants you Dead

And then there was this in The Mercury News today about deaths in skilled nursing facilities (SKF).

Cindy Note: there's not one mention in this article about Governor Newsom's "pay" for murder in this article. On, or about May 6th, Newsom offered SKF up to $1k per person, per day to admit ill people into the facilities. Even though most hospitals are nearly empty and many HIGHLY skilled and trained medical professionals are being furloughed repeatedly during this crisis. It seems clear to me, that this is massive, pre-meditated murder by the state.

The order I mention above has been scrubbed from the State Health Department's website, but it was referenced here in The Mercury News on May 6, 2020.

CONCORD — At least 14 people are dead after COVID-19 infected 75 people at an East Bay skilled nursing facility, according to data published by the state.

The state Department of Public Health’s latest report shows that 14 patients at San Miguel Villa, a post-acute nursing facility in Concord, have died after contracting the virus, which infected 62 residents and 13 workers at the facility.

A call to the facility was not immediately returned, so it’s unclear when the deaths occurred. Data reported to the state by the nursing home within the past 24 hours reveal that there are still 45 patients there infected with COVID-19.

The state list on Tuesday showed that at least one healthcare worker at the facility had also died of COVID-19, but a spokesman for the facility, Dan Kramer, said Wednesday that it had been incorrectly reported, and that no workers had died.
The latest outbreak is yet another example of how the disease has ravaged the Bay Area’s most vulnerable population of elders living in congregate settings such as skilled nursing facilities or assisted living centers.

Of the 94% of the state’s 1,223 skilled nursing facilities that reported COVID-19 cases this week, there are currently 2,300 patients and 49 health care workers with confirmed COVID-19 infections, according to the state data. Cumulatively, there have been at least 12,282 confirmed cases across California and 7,655 cases among workers at skilled nursing facilities. And 2,299 patients and 89 health care workers have died from causes related to the deadly virus.

In non-medical residential care facilities — known commonly as assisted living facilities — there have been at least 2,969 confirmed COVID-19 cases among patients and staff, who often provide assistance in feeding, bathing, taking medication and other activities. At least 398 people in those facilities have died from COVID-19.

In Contra Costa County, health services director Anna Roth told the Board of Supervisors during its Tuesday meeting that of the 18 COVID-19 deaths that occurred the past week, 16 were from long-term care facilities, such as nursing homes. She did not identify the facilities.

Dr. Sara Levin, a deputy health officer for the county, told the supervisors a county task force had been set up to visit care facilities and help them proactively beef up infection control protocols and provide support in acquiring masks, gloves and other protective equipment, as well as ensuring they had enough staff if workers had fallen ill. The county at the end of May issued a health order to conduct mass testing as a baseline for all long-term care facilities, and then to continue testing staff monthly.

“Where we’ve seen a lot of the spread is when staff in these low-wage jobs are having to work in multiple facilities to ensure their financial stability, without benefits that don’t necessarily allow them to have sick leave,” Levin said. When federal, state and county mandates prevented most visitors, she said, “many residents were staying in facilities, so it was staff members going out to the community … and bringing it in.”
Concord’s San Miguel Villa is a 190-bed nursing facility on San Miguel Road owned and operated by Mark Callaway, Gary Jarvis and Velda Pierce. Pierce and Callaway also own other Contra Costa nursing facilities: Alhambra Convalescent Hospital, Lone Tree Convalescent and Antioch Convalescent Hospital, according to state records.

Since 2017, the facility has had a total of 106 complaints or reported incidents, and state inspectors found a total of 36 “deficiencies.” Some of those deficiencies included problems with infection control.
In an inspection in April 2019, for instance, state inspectors found multiple licensed vocational nurse staff members had not followed proper handwashing protocols.
Last year, the family of an elderly man who died at San Miguel Villa sued the facility, saying its lack of staffing and training led to the man’s suffering. The facility used drugs to sedate him, the lawsuit alleged.
Staffing shortages and lack of adherence to infection control practices have contributed to the outbreaks in nursing homes, experts have said.
“We are really concerned about the lack of oversight in skilled nursing facilities like San Miguel Villa,” said Nicole Howell, executive director of Ombudsman Services of Contra Costa, Solano and Alameda counties. “This underscores the need to improve regulation and oversight — particularly one that specializes in dementia and memory loss.”
The outbreak and death toll at San Miguel Villa is among the largest in East Bay skilled nursing facilities.

East Bay Post-Acute in Castro Valley has had a total of 16 COVID-19-related patient deaths, and 18 patients at Gateway Care and Rehabilitation Center in Hayward have died of the virus. In San Mateo County, Millbrae Skilled Care has had 14 COVID-related deaths, and more than 100 cumulative infections among patients and 31 cases among health care workers there. But the state data shows there are no infections reported in the last 24 hours at that facility.
In Santa Clara County, 12 patients of Canyon Springs Post-Acute nursing facility in San Jose have died of COVID-19, and at one point 106 patients and staff were infected with the virus. There were no current cases within the last 24 hours, according to the state data.
Update: An earlier version of this story reported at least 15 people had died of COVID-19 at San Miguel Villa. A spokesperson confirmed the state data incorrectly reported that a healthcare worker had died.

First, thank you so much for your beautiful article on eldercide.

A couple I’ve known my whole life, who were my parents good friends. In April, the 95 year old man, from my understanding from my friend my age, his daughter, died, in & out of hospital, & I believe alone Through much of it due to this insanity lockdown.

He’s 91 year old widow, who I love dearly, has been extremely traumatized through the insane experience. And now she is suffering because she and her family have been taught that them being close to her and hugging could be threatening her life.

In addition, the funeral was immediate family only. They would have had hundreds of people that would’ve been there after to comfort this beautiful 91-year-old widow, but everyone suffered being separated because of the believe in this false virus.

This is the worst hoax in American history.

A very good friend of mine In Arizona now, brought her mom to a nursing home Near her just so that she could visit. She has now not seen her for three months and her mom has lost the desire to live due to loneliness, and God knows what she has to deal with in a nursing care facility.

Bill gates, and the rest of the billionaire global elite are killing millions of people, and their plan is to continue unless we all stand up and say no you won’t get away with this.

If we do not stop these Nazis now, while we still have the strength, and a speck of our rights, they will have succeeded in taking over and none of us will have a chance.

Thank you so much for your beautiful article.

Justice for Covid-19 Eldercide Strategy Meeting to plan ways to hold governors and others accountable!


We at Justice for Covid-19 Eldercide are thinking of organizing rallies at all the state capitols (and other government offices, if you are not in the US) where people who were diagnosed with Covid-19 were put in Skilled Care Facilities, killing tens of thousands, maybe hundreds of thousands of elders and disabled people around the world.

If you would like to join us in the planning/organizing of these actions, please join us for a conference call on Friday July 3, at 4pm pacific; 6pm central, 7pm eastern.

Also, we need people to volunteer to take the lead in your state/province/country.

You can message Cindy Sheehan at:
CindySheehansSoapbox@gmail.com
for more information.