GUEST: KEVIN BENDERMAN
TOPIC: WAR, WHAT IS IT GOOD FOR?
Part One*

This week's guest, Kevin Benderman,
was a US soldier who, after witnessing horrors and
war crimes in Iraq on his first deployment, refused to
be re-deployed and was court-martialed in 2005 and served
time in Federal Prison. 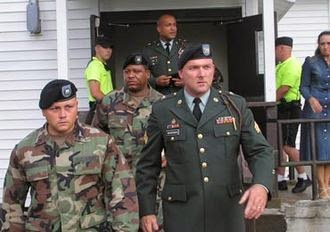 Kevin at his court-martial

*Part Two will be on April 12th and feature Iraqi Raed Jarrar was in
Iraq with his family during "Shock and Awe."
Posted by Cindy Sheehan's Soapbox at 7:52:00 AM