I think that since I have been doing my "peace thing" for so long and I am such an outspoken critic of US militarism, and relentless supporter of civilians being harmed by the US Empire, that some people forget that I am also a grieving mother whose own son was a victim of US militarism. Trust me, I never have forgotten for one moment for the past 14 years.

A couple of weeks after my son Casey was killed in Iraq on April 04, 2004, I was watching a cable news network (which shall remain nameless) and I saw a report on a memorial in Santa Barbara called "Arlington West" which was sponsored by Santa Barbara Veterans for Peace.

I had never heard of this memorial, nor had I heard of Veterans for Peace at that point. However, since Mother's Day was approaching, I told Casey's dad and my then husband Patrick that going to Santa Barbara and going to Arlington West was what I wanted to do that Mother's Day.

The people including Stephen Sherrill who had been featured 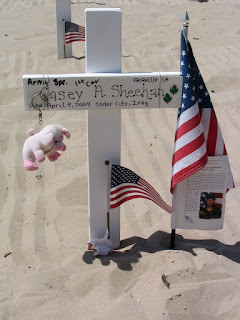 building the crosses that were to symbolize the then 700 plus US troops killed in Iraq by that point (one for each death) were so welcoming and sympathetic towards our story and they called filmmakers/peace activists/artists Sally Marr and Peter Dudar up from L.A. to interview us for what would become their film: "Arlington West."

Since that Mother's Day--which was pure torture for me, I have resolved to do something positive for peace on every Mother's Day. To me, it's not the "Hallmark/Brunch Day," but a day I have been in the trenches working against war.

I am not a "good Gold Star Mother" who finds meaning in her child's death by worshiping the institution of war, but one who desires to put my grief in the faces of the war mongers and share it with those who are on the same page as I. I try to find meaning in my wonderful Casey's death by trying to bring peace through education and awareness.

I have spoken in such places as the Adirondacks, Des Moines, Washington DC, and Los Angeles on Mother's Day. Since I have dedicated that day to Peace, I rarely get to spend it with my living children and grandchildren, but they understand and a Mother's Day doesn't go by where we don't talk to each other, no matter where I am in the world.

However, this year, I will get to be home and spend time with my family, but I am organizing and promoting a "Mother's Day Money Bloom" for our Women's March on the Pentagon (October 20-21).

As Julia Ward Howe said in her Mother's Day for Peace Proclamation:

Arise, all women who have hearts, whether your baptism be that of water or of tears! Say firmly: “We will not have great questions decided by irrelevant agencies, our husbands shall not come to us, reeking with carnage, for caresses and applause.

“Our sons shall not be taken from us to unlearn all that we have been able to teach them of charity, mercy and patience. We women of one country will be too tender of those of another country to allow our sons to be trained to injure theirs.”

From the bosom of the devastated earth a voice goes up with our own. It says, “Disarm, disarm! The sword is not the balance of justice.” Blood does not wipe out dishonor nor violence indicate possession.

As men have often forsaken the plow and the anvil at the summons of war, let women now leave all that may be left of home for a great and earnest day of counsel. Let them meet first, as women, to bewail and commemorate the dead. Let them then solemnly take counsel with each other as to the means whereby the great human family can live in peace, each learning after his own time, the sacred impress, not of Caesar, but of God.

In the name of womanhood and of humanity, I earnestly ask that a general congress of women without limit of nationality may be appointed and held at some place deemed most convenient and at the earliest period consistent with its objects, to promote the alliance of the different nationalities, the amicable settlement of international questions, the great and general interests of peace.

The Women's March on the Pentagon is calling this general congress of women from around the world to combat the toxic masculinity of war. 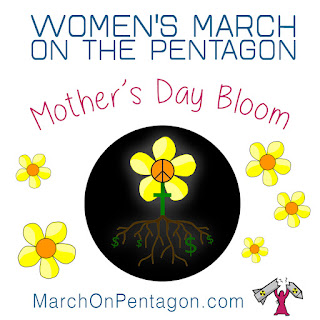