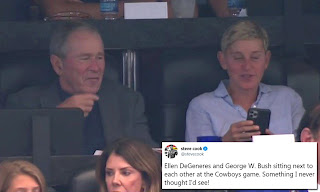 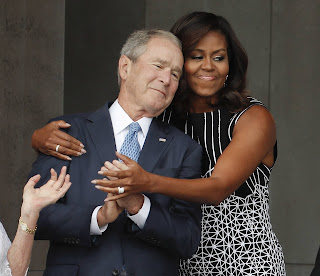 *Of course their "values" are the "same." They both belong to the untouchable political class whose only connection to humanity is murdering and oppressing it; and uses their offices to simultaneously promote and hide corruption. They are creatures that roam in the broad daylight, but should be reviled, not rehabilitated.

What is most ironic about the love Ellen has for George is that his regime opposed gay marriage and classifying crime against LGBTQ as a hate crime. When Ellen went on social media to do some virtue-signaling, kindness-shaming, she was acting like perhaps people weren't being "Kind” to George because he parks in handicapped spaces, but his legacy is many magnitudes worse than that!

For as much as the legacy of Barack Obama has been completely rewritten by liberal ideologues, the same has been done with the murderous legacy of George Bush and by the very same people. This is unsurprising however, as these days liberals will take whomever they can get as long as they aren’t Donald Trump (even a war criminal with escalating mental decline: Joe Biden).

John Bolton, Rex Tillerson, Mitt Romney, and John McCain are just some of the warmongering enemies of the people that have been rehabilitated to suit the whims of the anti-Trump crowd. Each of these people has/had a laundry list of crimes and misdemeanors that would land you or I in the Big House for the rest of our lives, or land us in th electric chair. George Bush however has the distinct honor of having perhaps the most offensive rehabilitation processes. The wars in the Middle East, launched on lies and misinformation for the goal of further enriching the global oligarchy in so many ways, will be one of the most disgusting lasting legacies of a US President. As the garbage year of 2020 is slowly shifting to our rear view mirrors, many are forgetting the events of 9/11/01 and the violent reaction of the Bush regime that has propelled the U.S. into a complete quagmire of imperialism that continues unabated to this day. 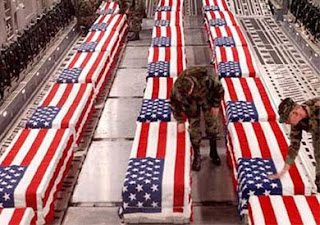 Of course, on April 04, 2004, my life tragically intersected with the policies of the War Criminal George. My oldest son, my dear boy, my wonderful human, Casey Austin Sheehan was murdered by the policies of the Bush regime in Iraq. Even before Casey left, I knew if something happened to him, it would be because of the lies of George Bush. Of course, the War Criminal George had a lot of demonic help, but he was the one at the helm of the so-called Ship of State. Not only is Casey dead, but over one million Iraqi suffered that fate along with thousands of US troops, and the country is now in tatters.

To this day, babies born to Iraqi mothers are born with horrifying birth defects and older children are getting blood cancers and hard tumor cancers at a higher rate than other countries. Any person with any shred of decency would be throwing their shoes at Bush like the heroic Muqtader al Zaidi; not “being kind.”

I have spent my life since 04/04/04 trying to hold Bush accountable for the death of my son; however, all the deaths are personal to me. I even camped out in front of his “ranch” in Crawford Texas many times to bring attention to his crimes and the fact that he is going unpunished.

I will be goddamned if I am going to allow the War Criminal George to be allowed to live in peace and be thought of as something other than the complete monster that he is.

By the Way: Joe Biden's Role in the War on Iraq