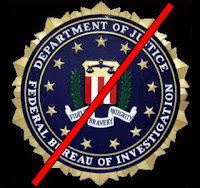 January 17, 2011
Defend Free Speech and the Right to Organize!
Opposing War and Occupation is not a crime!
Noon: Protest at FBI Headquarters
935 Pennsylvania Ave, NW, Washington, DC
1 p.m.: Convoy to Quantico Military Base
caravan to Quantico, Virginia (about 1 hour south of DC)
Protest FBI Sureveillance and Harassment of Activists

Celebrate Martin Luther King Jr. Day and honor the hundreds of courageous civil rights activists who fought for justice during the 1960s and 1970s, but were spied on, harrassed, undercut and villified by the FBI.

Stand up for the 29 peace and solidarity activists from Chicago, Minneapolis and Michigan who have been subpeonaed to appear before a grand jury purportedly investigating material support of terrorism, but really meant to intimidate international solidarity activists.

We'll convoy down to Quantico Marine Base at about 1 p.m. for a rally to support Bradley Manning.

Blowing the Whistle on War is Not A Crime!

Bradley Manning, is an army whistleblower who faces decades in prison for revealing truths about the wars in Iraq in Afghanistan and U.S. diplomacy. Manning, a 22 year-old Army intelligence analyst, is suspected of leaking the video “Collateral Murder,” which showed an U.S. helicopter attack that killed at least eleven Iraqi civilians. He is also accused of leaking the "Afghan War Diaries" -- tens of thousands of battlefield reports that explicitly describe civilian deaths and cover-ups, corrupt officials, collusion with war lords and a failing war effort; and thousands of U.S. diplomatic cables revealing , and thousands of documents relating to the war in Afghanistan, and thousands of U.S. diplomatic cables.

Currently, Manning sits in the brig at Quantico Marine Base -- in solitary confinement and under inhumane conditions. Presidential hopeful Mike Huckabee and Rep. Mike Rogers (R-MI) have called for Manning’s execution.

We call on the Army to release Bradley Manning from his pre-trial confinement, and drop all charges against him.