Meet Peace Activist extraordinaire Cindy Sheehan on her Cycling trip across the US from California to Washington DC (deceit), on the Michigan leg of her Tour de Peace April 4th - July 3rd. She will be in:
Ann Arbor rally on the Campus Diag, 2-5pm, June 5th.

Meet Cindy Sheehan - the Peace Mom speaks to end:
- all wars
- immunity for US war crimes
- supression of our civil rights
- persecution of whistleblowers
- partisan apathy and inaction
- the use of fossil fuels

The Goddess of Cycling by Cindy Sheehan 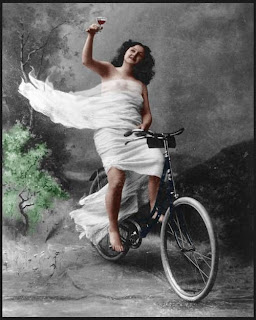 The Goddess of Cycling

Tour de Peace woke up in St. Louis in a downpour on May 28th.

What to do? Obviously, there's no riding in lightening and Mike Reid the Executive Director of Veterans for Peace came to our rescue.

We met Mike at a cafe and he laid our day out for us that was to eventually include: a trip to the Logan School of Chiropractic where my butt injury was diagnosed and treated (tore sacrococcygeal ligament when a porch swing collapsed under me ten days ago); the doctor customized the fit of my bike to me since he is a sports medicine doctor who has worked with professional cyclists for years; Mike treated my bike to a tuneup and took Team Tour de Peace out for pizza and I was able to get a delicious gluten free/vegan pie at Pi in The Loop neighborhood of St. Louis.

The day with our new best-friend, Mike, was awesome. By the time my bike and butt were tuned-up, the rain had stopped so we said a sad good-bye to Mike and headed to the St. Louis Gateway Arch.

The Arch symbolizes the "Gateway between the East and West" and after we left the Arch, we cycled over Eads Bridge into our 8th state and we will be sadly be leaving Route 66 where it ends for us in Chicago on the 3rd. Route 66 with all its quirkiness and charm has become like a close friend to us as we have very slowly cycled down it, foot by foot for just short of two months.

I am very proud of what Tour de Peace has accomplished since we began on April 4th at my son's grave in Vacaville (today, May 29, would have been Casey's birthday if he wasn't killed in another Imperial war for profit and hegemony). We have ridden through eight states and have experienced some wild weather and rough roads. Except for my porch swing mishap, we have come this far unscathed. I pat ourselves on the back, that's for sure! 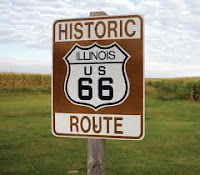 After we crossed into Illinois, we drove (was too late to bike) to Mt. Olive and made a pilgrimage to the monument/grave of Mother Jones to pay our deepest respects and draw inspiration from the life of the Granny of radical movements. It was a special time for me.

Today, (May 29th) started out clear and humid and just got more hot and humid as we went. I, and my sidekick, Dan, started cycling South of Farmersville and, as we say, the "Goddess of Cycling" was definitely on our side with a tailwind AND mostly flat terrain. It's been a long time since we had a day like today and we were really happy, at least my butt was, to have an easy ride of about 20 miles to Springfield, from where I am writing this piece.

Tour de Peace has some exciting events planned for the remaining month, or so, so please go to our website and check it out! 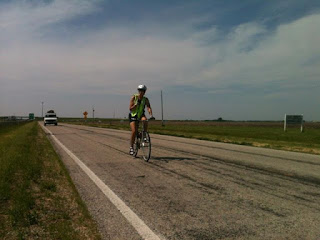 Me, on the road to Springfield 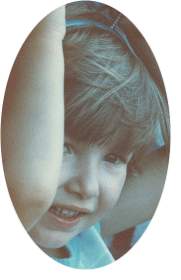 I am already crying.

My oldest child, Casey, would have turned 34 years old today if he hadn't been murdered in one of the US Empire's string of needless wars for profit and Imperial hegemony.

Birthdays are more difficult to endure than deathdays. Deathdays are supposed to be sad, but birthdays should be a day of celebration and joy.

Casey was born at 1:01 in the morning after a long day of labor at Kaiser Hospital in Bellflower, Ca. When he was little, we still lived near Kaiser and whenever we passed it, he would mix "General Hospital" and "The Dukes of Hazard" and say, "There's the General Lee hospital where I was born." Casey was filled with life and wonder as are most toddlers. Every night when we would tuck him in and kiss him good night, he would say, "this was the best day of my life."

After he was murdered, my life was shattered and my heart was demolished and after nine years, the tears are still spilling over and never far from the surface. However, the only way to go is forward and Casey lives in all of us.

I read somewhere that gravestones give the vital statistics of birth and death, but the "dash" between those dates really tells the story. Casey's "dash" was short, but he was a boy, then man, who had strong principles that he never wavered from. He didn't want to go to Iraq, but he went and was killed a few days after he got there after refusing the order that led to his death. Casey was forced to go on the mission that killed him and I was never comforted by all the "hero" talk until I learned of the true hero he really was. Casey could never kill anyone and I know if he had survived his initial deployment, he never would have been the same.

In honor of my brave son, I am determined to infuse my "dash" with the struggle for peace and a nation where peace reigns and things like education and healthcare are human rights, not privileges for the oligarchy--so our children don't have to fight, kill, and die (or go into onerous debt) to receive the human right of a decent education.

"Just think about it...Where would we be?" by Cindy Sheehan on Memorial Day.