Cindy Sheehan is still on break diligently working on her new book, but in honor of Bradley Manning, we are
compiling a list of Soapbox Podcasts related to
political prisoners and other US (in)justice system related
issues! 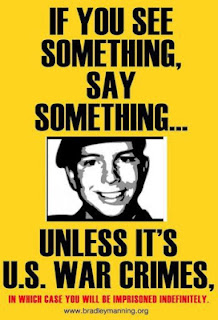 Please check it out and listen if anything strikes your fancy!

This complilation reflects the seriousness with which we take this issue.

The Soapbox believes that trying to remove specks out of the eyes of other world leaders about this issue while ignoring the huge log in Obama's eye fails to address the true issue:
The US incarcerates more people per capita than any other country and it is obviously at least two different (in)justice systems--one for the rich and another for the poor.

Here at the Soapbox, we also think it's tragic that more people in the US have heard of Putin's Pussy Rioters than of Bradley Manning, Lynne Stewart or the Cuban 5.
(We try to change that!)

(From Earliest to Latest)

Torture as Policy, then and now - June 07, 2009 (SOAPBOX #21 - Cindy chats with San Francisco Black Panther Party member Richard Brown about the case involving torture, institutional laziness, corruption, cruelty, and ineptness and the trial for murder he is involved in, beginning tomorrow in San Francisco.  We need to address society's use of Torture as Policy, whether occurring today or 38 years ago in New Orleans, conducted with help from the SF PD.  See Cindy's op-ed from Friday's SF Chronicle "Drop charges in 38-year-old murder case". Her article appeared on page A - 13.)
(SF 8)

Injustice to one = injustice to all - June 14, 2009 (SOAPBOX #22 - Cindy interviews Khalil Meek of the Muslim Legal Fund of America (MLFA), about another travesty of justice involving the so-called Holy Land Foundation 5. Ever since the the murders of 9/11 our Nation has seen far too many travesties of justice - all rooted in fear. While it would be presemptuous to label any one of these "the worst", this is surely an outstanding contender for that title! Please visit their site, and donate anything you can to help fund the legal appeal appeal of these brothers: Muslim Legal Fund of America.)
(HOLY LAND FOUNDATION 5)

Two-fers - August 9, 2009 (SOAPBOX #29 - Cindy features two guests: Manny Badillo, who is co-ordinating NYCCAN - a ballot initiative demanding a full and private investigation into the 9-11 attacks that includes subpoena power and immunity for so-called whistle blowers, plus Francisco Torres (a member of the "SF-8") who was falsely accused of murder by confessions that were gleaned from torture:  In 1971!  We want the truth, the whole truth and nothing but the truth!  Check it out!
(SF 8 AGAIN)

M*A*S*H Who, Igor? - October 4, 2009 (SOAPBOX #36 - Cindy's guest is Mike Farrell - Captain B.J. Hunnicutt he's not. But he is a famous actor - and a died-in-the-wool progressive activist. (He's been a fiend of Cindy's for quite a while.) Mike shows himself to be a very serious intellectual, with plenty of insight to offer on the key issues of the day - up to and including the death penalty. Yes, this was a really worthwhile discussion. It even included talking about the executed - but innocent - Cameron Todd Willingham. (Scalia says "It's OK: We gave him a fair trial before we killed him.") So WAKE UP & tune in, folks!
(DEATH PENALTY)

STOP the KILLING - January 24, 2010 (SOAPBOX #47 - Cindy welcomes Robert R. Bryan, defense attorney representing Mumia_Abu-Jamal.  He has been described as "perhaps the best known Death-Row prisoner in the world," and his sentence is still one of the most debated today.  On Friday, 1/15/10, the US Supreme Court was to hear Pennsylvania's effort to execute Mumia, so arguments are still going on.  Please tune in and let Cindy and Robert update you.  Listen in!
(MUMIA)

Blast from the Past - January 31, 2010 (SOAPBOX #48 - Cindy says farewell to beloved and revered Howard Zinn (August 24, 1922 - January 27, 2010), an inspiring and influentual American historian, author, activist, playwright, intellectual and Professor of Political Science at Boston University from 1964 to 1988.  He was interviewed on this show by guest-host Cynthia McKinney on September 27, 2009.  His trenchant insights are especially valuable now following the attempted health care reform melt-down and the planned "budget freeze" on help for the people - but no budget freeze on help for the war industry.  Cindy replays the interview.  She also hosts Betty Ann Peltier, sister of designated (and innocent) scapegoat Leonard Peltier, convected for the deaths of two FBI agents at Wounded Knee in 1975.  (At one time it was widely known that the FBI never proved Leonard was even at Wounded Knee when the agents died.)  Please tune in and let us inform you.  It's worth checking out!
(LEONARD)

Criminalized Dissent - April 4, 2010 (SOAPBOX #55) - Cindy welcomes three friends who were "guests" of our Gubbermint for 50 chilling hours during the opening of Camp Out in protest of our ever-surging Nobel Peace Prize Lauriate's addiction to: - to surging, (thereby killing lots of our soldiers, along with innocent Af-Pak civilians.)  This week's show is about criminalization of protest and dissent.  Cindy's guests are three Gubbermint "guests" who got arrested with her on March 20th: Elaine Brower, Jon Gold, and Matthis Chiroux.  Elaine is with the World Can't Wait (WCW) and Military Families Speak Out (MFSO).  Jon is an active 9/11 Truther, from way back.  Matthis is an active war resister and member of Iraq Veterans Against the the War (IVAW).  All three thought that D.C. officialdom this time was starting to get much nastier in repressing dissent than "back in the good ole days" - but all felt they had clearly done the right thing, and they all were happy for having made that choice.  So hey, boyz and grrls, please listen in for our show.
(ANTIWAR PROTESTERS)

Just Say Now  -  August 15, 2010 (SOAPBOX #67) - Cindy welcomes Tommy Chong to chat with him about legalization/decriminalization of marijuana, and the use of hemp for plastics and fuel.  Tommy Chong is a marijuana activist, and a supporter of marijuana legalization and medical use of marijuana.  (Only I really must apologize for something here, boyz and grrls:  This episode's name is a blatant rip-off of Jane Hamsher's most outstanding and desperately needed Marijuana Legalization campaign.)  We also speak with a San Francisco pot activist, Mesha Monge-Irizarry, who will talk about these issues from a local standpoint.  Former Soapbox guest Ralph Lopez offers his EXPLOSIVE observations:  He notes that the Wikileaks soldier who found the rocket launcher at the scene (last week's guest, Ethan McCord) says "No Attack Was Imminent."  McCord discussed these observations in last week's interview.  The massacre video showed 12 men, including two Reuters newsmen, standing on a street corner before being fired upon with the Apache's 30mm cannon, resulting in what appears to be unprovoked murder. The video caused an international outcry after it was leaked to the media by the government watchdog Wikileaks.  The presence of the rocket launcher that McCord found was seized upon by defenders of the attack as proof that the attack was justified, and offered as evidence of an impending ambush.  There's only one problem: Ethan McCord says "It ain't so!"  Click here to read Ralph's article and listen to the interview.  Today's discussion asks "Why is our nation jumping so rabidly on the Save Drug Cartel Profits bandwagon?"  I mean, come on.  Haven't we already tried prohibition, back in the 1920s & 1930s?  Do we really need to guarantee the continuance of drug related carnage, exactly as bootlegging profits fed Prohibition carnage back then?  It looks like we will need to use the power of NO to stop rewarding drug cartels with Marijuana profits and generate some desperately needed State revenue.  Please use the link above to listen to today's discussions.
(TOMMY CHONG)

Anniversary Madness  -  January 16, 2011 (SOAPBOX #81) - Cindy presents admirably scurrulous election satire by no less than George Carlin, and then "celebrates" two anniversaries, one famous and most healthy for our nation - but oh so hated today by the "religious right" (which is really neither) - Roe versus Wade - and the other, a truly sickening anniversary, that of the opening of Guantanamo Bay Prison, on Jan 11th, 2002.  Roe versus Wade is commemorated by Somer Loen, a long-time activist for the Bay Area Coalition for Our Reproductive Rights, or BACORR.  The disgusting opening of Guantanamo Bay Prison by Matthew Daloisio of Witness Against Torture, another long standing activist against our modern Imperial "Death State" (as so eloquently designated by one of our webmaster's heroes, Arthur Silber).  Cindy and Matt have an illuminating discusion about Guantanamo and its meaning for America's future.  A future which we all hope will be far brighter than today's sad state of affairs.   Please use the link above to scope out the madness!
(GITMO)

Dissent, as a Federal Crime  -  May 8, 2011 (SOAPBOX #96) - Cindy hosts Ralph Poynter, husband of Lynne Stewart, telling us Lynne's story:  Lynne found the truth:  Told the truth:  Learned too many of the powerful - hated the truth.  Eventually she was convicted of supplying her blind Egyptian cleric client (Sheikh Omar Abdel-Rahman) TO THE TERRORISTS - by virtue of having defended him.  Which, of course, she was legally obligated to do.  They also found her guilty of "conspiring to kill American Citizens overseas" - avoiding pesky embarrassing questions like asking which American citizens (i.e., who?)  Without raising questions like what did she plan to do to them?"  Without specifying "when did she originate this unspecific - but still nefarious (huh?) plan."  Finally, the prosecutors skipped questions of the form "overseas, where?"  So let's see:  She's guilty of a crime.  We don't know what the planned crime was.  We don't know who the targeted victims were.  We don't know when did she "conspire."  We don't even know where this conspiracy was planned.  WE KNOW NOTHING.  Having said that, I can but recommend: listen in as Ralph rips into this "school of thought" - and tears them some brand new anal orifices!  How 'bout some Mother's Day cards and letters for Lynne, boyz and grrls?  She has risked so much for all of us.  Life in lockup is very hard on dissidents. To at least some degree her life in lockup depends om how many people respect & support her through snail-mail and post cards.  Her mailing address is LYNNE STEWART; 53504-054; FMC CARSWELL; FEDERAL MEDICAL CENTER; P.O. BOX 27137; FORT WORTH, TX 76127.  The more public support she has, then the less official harassment she must face.  Please use the title link above, and listen to their revelational discussions.
(LYNNE STEWART)


It's f*^&%ing STUPID to hand out Death Penalties!  -  October 9, 2011 (SOAPBOX #112) - Cindy brings aboard Martina Correia, sister of the likely innocent - but still executed - Troy Davis.  Today we all dwell in a dungeon of economically-driven inequality, where so-called "cop-killers" are put to death but killer cops go free with at most a slap on the wrist. (Ask the relatives of Oscar Grant, executed by BART police as he lay on the ground, unarmed and fully cooperating.  The unprovoked killing was captured on numerous videos and went viral on YouTube.  Oscar's killer was eventually found guilty of "involuntary manslaughter.)"  Now it's too late for Oscar.  It's also too late for Troy.  And back in the present day, Martina is carrying on the fight for accountability.  Cindy and Martina discuss this killing, who is responsible and how they can be held to account for what they've done.  They talk about the Georgia Parole Board - which will spare the life of one who pleads "guilty," but vengefully kills any who insist on their innocence.  This is state sponsored killing of the innocent.  Of course, bear in mind that some who proclaim their "innocence" are actually guilty; but who among us are wise enough to NEVER make a mistake?  Who is wise enough to carry the burden of choosing life or death - for others?  Cindy and Martina continue to explore the relevant issues here.  Please use the title link above this paragraph to listen in to Cindy and Martina!
(TROY DAVIS) 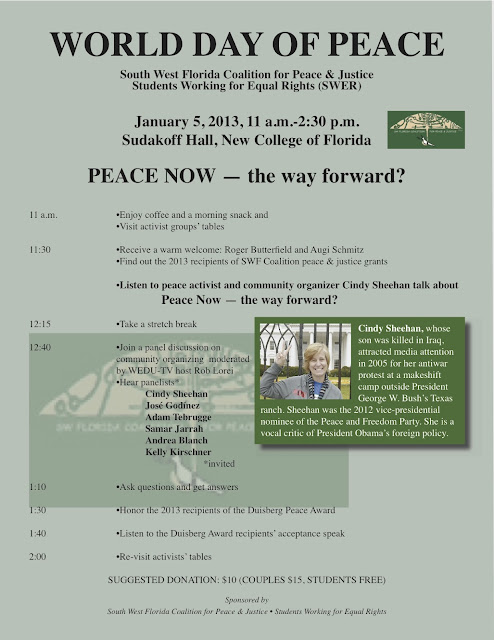 Where Is Cindy Sheehan?

Peace, how? The Way Forward by Cindy Sheehan 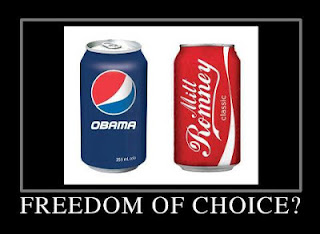