SUMMER FUNDDRIVE FOR THE SOAPBOX

Posted by Cindy Sheehan's Soapbox at 8:51:00 AM No comments:

Currently, there is a film in production called:
Paying the Price for Peace: The Story of S. Brian Willson and the Peace Movement

CLICK PHOTO TO CONTRIBUTE TO THE FILM
Posted by Cindy Sheehan's Soapbox at 9:23:00 AM No comments:

This article will be fairly popular among the faux-gressive set because I will be primarily “bashing” George Bush. By the time George Bush left office, my act of minority courage in criticizing Bush became a national (socially acceptable) pastime. It hasn’t been so criticizing Obama from the far left—righties assume I love him and Democrats think I am a “teabagger.” Actually, the only thing I have been since my son was killed in Iraq is a principled antiwar activist.
CLICK HERE TO READ MORE
Posted by Cindy Sheehan's Soapbox at 8:42:00 AM No comments:

The Travesy of "Health" care by Cindy Sheehan


Please help Dede (if you can) with her medical costs.

Dede's GoFundMe page
Posted by Cindy Sheehan's Soapbox at 10:18:00 AM No comments:

This week Cindy chats with the General Secretary of the Revolutionary Organization of Labor, USA (ROL-USA) about
The Trans-Pacific Partnership and how Republicans are being used to give Obama the cover ("look at what those evil Republicans are up to") to pass a law that will benefit the global-elite and hurt the "99%"

Posted by Cindy Sheehan's Soapbox at 9:10:00 AM No comments:

It is with great concern but with hope that I write to you to let you know that my sister/best-friend/peace colleague, Dede Miller has recently been diagnosed with Stage 3, very aggressive and rare breast cancer.

For a few months, she (and by extension as her primary support person, I) has been struggling with the monolithic bureaucracy of LA County "health" care. I have traveled from my home several times to LA to be with her. I can't see how a person can go through what Dede has had to go through alone.

Dede has been by my side forever, not just since Casey was killed in Iraq. Dede, being a single person without children has been like a second mom to my kids and now the beloved Auntie to my five grandkids (she gets all the fun). However, since Casey has died she has been with me--getting arrested for peace; organizing Camp Casey and all of the other harebrained schemes I have come up with; campaign staff; and now my only co-worker in Cindy Sheehan's Soapbox and The Soapbox People's Network.


Back in 2005, Dede decided to leave corporate America to help me work for peace and now is finding it difficult (if not impossible) to survive with breast cancer AND fighting for her life to access basic services like medical care and disability (she doesn't qualify). Besides working for peace, we have been on the frontlines working for economic equality and social justice, and when we need it, it's not available.

Our family is working together to try and get Dede all the advantages she needs to heal herself from this terrible disease. We appreciate all of the well-wishes and healing thoughts, but we really don't need any more alternative therapy advice, we are exploring ALL options and know about these options.

What we do need (besides your healing energy) are donations to give Dede this fighting chance to beat this awful (yet tragically) prevalent disease.

One of our good friends, Jolie Diane, has set up this GOFUNDME page for Dede--please give what you can and/or share this campaign.

It's our most important campaign to date. Dede has been fighting for you full time, now please give her a fighting chance to continue in the struggle. 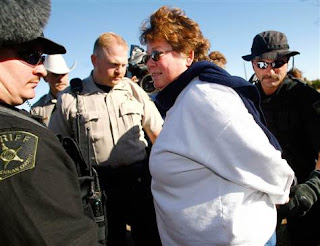 OR SEND CHECK/MONEY ORDER TO
(MAKE CHECK OUT TO CINDY SHEEHAN'S SOAPBOX):


http://www.gofundme.com/DedeM
Posted by Cindy Sheehan's Soapbox at 10:36:00 AM No comments: 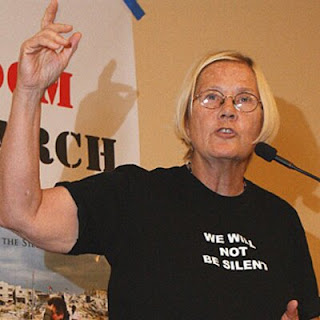 The Korean War has been called "The Forgotten War" but it is not forgotten by the Koreans whose country was torn apart by this war and families were separated.

There has never been a peace treaty. The war is technically still ongoing.

Today, Cindy chats with peace activist and dear friend Ann Wright who was on a delegation to the DMZ and North Korea to bring women together to demand peace.

ANN'S FACEBOOK PAGE
Posted by Cindy Sheehan's Soapbox at 9:58:00 AM No comments: