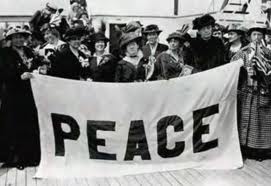 "Our sons shall not be taken from us to unlearn
all that we have been able to teach them of
charity, mercy and patience.
We women of one country will be too tender
of those of another country to allow our sons
to be trained to injure theirs."
- Juliet Ward Howe, Mother's Day Proclamation - 1870

Recently, I had the opportunity to see a movie called Water

. The film was written and directed by Deepa Mehta who is an Indian born Canadian most known for her Elements Trilogy: Fire, Water and Earth.
Water is set during the British Raj in India in 1938. It tells the story of a widow’s ashram where widows were forced to go after their husbands died to make lifelong atonement for the “sins” of each widows previous life that led to the deaths of their husbands.
Also, it was common for young girls to be married to older men so when the man passed away, the girl/woman would be able to spend a longer time doing this renunciation for karmic circumstances.
Water follows the story of an eight-year old girl named Chuyia who was married to an older man who dies—within a matter of days Chuyia is taken to the widow’s ashram where her Baba (Father) unceremoniously dumps her while Chuyia screams for her mother.
We learn at the end of the movie that as of 2001, there were about 34 million widows in India who are still under this Hindu tradition—“Brahmin widows,” are not allowed to remarry with the karmic penalty of being reborn as perhaps a jackal in the next life.
In the movie, after a young widow kills herself out of despair over a lost opportunity for love, one of the older widows tells Chuyia, “I hope she is reborn as a man.”
During the movie, I couldn’t stop thinking about Chuyia’s mother and all the mothers of these widowed children that were torn from their homes and their mother’s arms and what kind of society imposed such harsh propaganda where a woman wouldn’t just hit her husband over the head with a frying pan rather than allow her daughter to be stolen from her.
Gasp! That’s exactly the society we live in today here in the United States of America! I could not judge the “factional” Chuyia’s mother too harshly because I allowed the violent empire I live in to steal my son from me - and that’s what this story has to do with Mother’s Day.
I raised my son, Casey, to be a person of integrity, honor and above all, peace. We taught all of our children that there was always a non-violent way to solve problems: kicking, pinching, pulling hair, punching and other forms of violence were never tolerated and neither was name calling. I tried to live that principle and rarely used physical punishment with the children—so how did my oldest wind up in the meat grinder of the US military?
Even when 21-year old, Casey, enlisted in the Army (for college and other “benefits”), I was not happy, but I loved my son and I forced myself to respect his decision.
When 24-year old, Casey, marched off to the illegal, immoral, and completely unnecessary war in Iraq, I made half-hearted attempts to convince him to go to Canada, but when I saw that he was reluctantly doing what he called “his duty,” I tried to swallow my fear and choke back my tears to put the best face on a tragic situation.
When 24-year old, Casey, came home in a body bag encased in a coffin draped with the bloody flag of the murderous colonizer, I was told my son was a “hero.” I would say, “I know, but why is he dead?” Why did his country kill him and why did I let it?
The killers of my son gave me a “Gold Star,” yet, I will have to live the rest of my life in an invisible “grieving mother’s ashram” to make amends for failing in my job as a mother, but part of my atonement is to expose the Empire I live in for what it is: a callous purveyor of violence for profit.
There is no one in this world that cares for you more than your mother did, or your mother does.
When societal norms go against our very consciences and everything we believe and everything that we hold so dear and precious to us, we should stand up to that prevailing idiocy and refuse to allow our children to be mistreated by patriarchal, racist, sexist, and sadistic frauds.
The whole package of Imperial mythology and propaganda about fighting for “freedom and democracy,” and to keep the home fires burning for “Mom and apple pie “is a hard one to deconstruct when so many mothers want to believe the obvious lies with their whole hearts so they don’t have to have the added pain of knowing that their child died for nothing good.
From time to time, I have run across a few sad Gold Star Mothers who have had a child killed in the Empire’s Wars for Profit, and they take exception with me when I opine that our children died for nothing but greed. I have been told, “I didn’t like it when my son/daughter was killed, but if he/she didn’t go and fight them ‘over there,’ we would be fighting them ‘over here!” One mother even was thankful that her son fought and died so she wouldn’t have to “wear a burqa.” I kid you not!
As bad as the above meme is, the one about fighting them “over there,” also highlights the arrogance and racism of Empire that says that American babies have a greater existential imperative than other babies just because of some random accident of birth is monstrous.
Just about the entire antiwar movement has abdicated its responsibility to agitate for the greatest good in ending the wars - even the so-called feminist oriented ones - but I can guarantee you, we mothers could stop war by doing what Juliet Ward Howe advocated in the final paragraph of her 1870 Mother’s Day Proclamation:

"In the name of womanhood and humanity, I earnestly ask
That a general congress of women without limit of nationality
May be appointed and held at someplace deemed most convenient
And at the earliest period consistent with its objects,
To promote the alliance of the different nationalities,
The amicable settlement of international questions,
The great and general interests of peace."