W. Returns: The Silver Foot is Back? by Anthony Freda 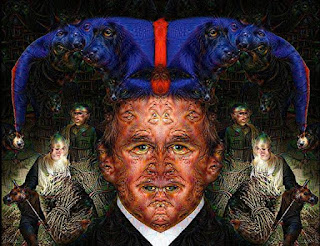 Art by Anthony Freda
"'Poor George. He can't help it - he was born with a silver foot in his mouth."
Ann Richards

Former president George W. Bush is back in the news this week. He took a break from painting bad pictures in his bathroom to come out criticize president Trump on a range of issues.

He defended the mainstream media that Trump has labeled "fake news" with a series of hollow platitudes. He said to Matt Lauer on "Today"  "I consider the media to be indispensable to democracy,"

"We need an independent media to hold people like me to account. I mean power can be very addictive, and it can be corrosive, and it's important for the media to call to account people who abuse their power. Whether it be here or elsewhere."

I agree with W. I wish the press had held him accountable for abusing his power. Unfortunately, the mainstream media he defends was complicit in his abuses of power instead of doing their job and exposing his lies and crimes.

They enthusiastically helped him promote the lies that provided the pretexts to the invasion of Iraq. As Lauer's former co-host Katie Couric put it, "There was such a significant march to war, and people who questioned it very early on, and really as the war progressed, were considered unpatriotic,'

Complaining of "strong-arm tactics," and "a lot of pressure from the Bush White House," Couric also said, "There was a sense, a pressure from the corporations who own where we work, and from the government itself, to really squash any kind of dissent."

Disgraced former NBC host Brian Williams put it this way, "I was in Kuwait for the buildup of the war,"

"and yes, we heard from the Pentagon on my cell phone the minute they heard us report something that they didn't like."

Now, the former cheerleader, W. comes to the defense of his own war-cheerleaders and puppets in the mainstream press. What a shock.

Maybe he is just upset that the woman he calls his "sister-in-law", Hillary Clinton lost the election. After all, she helped him lie us into the Iraq War as well and his family has publicly disparaged Trump.

She was the true heir to his legacy. She promoted both the Iraq War and The Patriot Act. The two cornerstones of his tenure. The former a monument to chaos and needless slaughter and the latter a desecration of the Bill of Rights.

Bush also chimed in on the conspiracy theory that Trump is somehow compromised by the Russians. Apparently, he thinks his old pal "Pooty-poot" is up to something.

Bush called for investigations into Russia's alleged hacking and leaking of US internal political documents. "We all need answers," Bush said. "Whether or not a special prosecutor is the right way or go or not, you're talking to the wrong guy."
He added: "That question needs to be answered."

Maybe W. has not heard that William Binney, Glenn Greenwald, Julian Assange and Ray McGovern All say that the story being told by the discredited, state/corporate fake news syndicate that Russia hacked US elections is not true.
These experts and whistleblowers and even the F.B.I. say there is no evidence to back up the anti-Trump narrative being promoted by Obama and Hillary loyalists in the intelligence community.
Why is this hysterical Russophobic and NeoMcarthyistic narrative being promoted by Never-Trumpers and their minions in the corrupt mainstream media?

Well, according to Assange, the reason is obvious.
"They're trying to delegitimize the Trump administration. They are trying to say that President Trump is not a legitimate president."

The same media and establishment that warns us of the dangers of alternative news are disseminating a fake news story that could provoke a nuclear conflict with Russia.

Oddly, Democrats are all over social media quoting and fawning over this war criminal's latest ramblings because he confirms their bias against the one man they hate more than him,
Donald Trump.

Bush also chided Trump about his immigration ban. Of course, W. (Along with Hillary and Obama) had no problem KILLING Muslims on a global scale, it's just the immigration issue that he finds so vexing.

"I think it's very important for all of us to recognize one of our great strengths is for all of us to be able to worship the way they want to or not worship at all," Bush said. "A bedrock of our freedom is the right to worship freely. I understood that right off the bat, Matt, that this was an ideological conflict and people that murder the innocent are not religious people. They want to advance an ideology." Bush said.

Maybe the man who killed a million people to advance his NeoConservative ideology should crawl back into his bathroom and atone for his own sins against humanity.


Anthony Freda is an activist, artist and professor of visual communication at F.I.T. in New York.
Posted by Cindy Sheehan's Soapbox at 8:47:00 PM