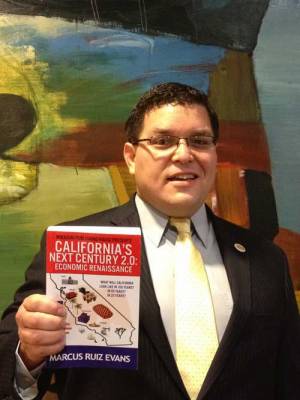 Marcus Ruiz Evans has lived in California his whole life, from the Central Valley and the Inland Empire, to Los Angeles and San Francisco. Having worked in the trade of global goods and served in government, he has seen through both his travels and career how other cultures value California’s distinct qualities. Of mixed Latino, Anglo and Native American heritage, Evans has experienced the state’s diversity in his own life, even pledging an Asian fraternity while attending a University of California school.

Marcus worked as a liaison between the State of California government and the Federal government for more than 10 years, forcing him to develop a personal understanding of this federal and state relationship. During this time, he also had the opportunity to work on Goods Movement efficiency studies, looking at how the international freight system operates and especially California's role in the world economy. He has traveled to Europe, Canada, and Mexico, observing firsthand their domestic infrastructure and connection to the Global economy. In addition, he traveled to many states in America, comparing views on international trade, but with a California perspective. Evans lived throughout California, including Los Angeles, the Inland Empire, the San Francisco Bay Area, Sacramento, and the Central Valley.

Marcus is the co-founder of #Calexit organizing group Yes California.

Yes California is the nonviolent campaign to establish the country of California using any and all legal and constitutional means to do so. We advocate for peaceful secession from the United States by use of an independence referendum to establish a mandate, followed by a nationwide campaign to advocate in support of a constitutional exit from the Union. By joining this campaign, signing up as a member, donating, volunteering, or otherwise supporting this important cause, you agree to these nonviolent principles.

While Yes California supports and encourages Californians to stand up and take direct action, to be bold, and to unapologetically demand the liberation of the people of California from its captors, we explicitly reject conduct or speech inciting open rebellion against the American government.

In the Spring of 2019, Californians will go to the polls in a historic vote to decide by referendum if California should exit the Union, a #Calexit vote.

You will have this historic opportunity because the Yes California Independence Campaign will qualify a citizen’s initiative for the 2018 ballot that if passed would call for a special election for Californians to vote for or against the independence of California from the United States.
This is a very important question. It is the responsibility of this campaign to explain what a yes vote will mean for you, your family, your community, our state, our country, and our world. We have designed this website to answer many of these questions and look to you to ask more.


"As the sixth largest economy in the world, California is more economically powerful than France and has a population larger than Poland. Point by point, California compares and competes with countries, not just the 49 other states.”


In our view, the United States of America represents so many things that conflict with Californian values, and our continued statehood means California will continue subsidizing the other states to our own detriment, and to the detriment of our children.

Although charity is part of our culture, when you consider that California’s infrastructure is falling apart, our public schools are ranked among the worst in the entire country, we have the highest number of homeless persons living without shelter and other basic necessities, poverty rates remain high, income inequality continues to expand, and we must often borrow money from the future to provide services for today, now is not the time for charity.

However, this independence referendum is about more than California subsidizing other states of this country. It is about the right to self-determination and the concept of voluntary association, both of which are supported by constitutional and international law.

It is about California taking its place in the world, standing as an equal among nations. We believe in two fundamental truths: (1) California exerts a positive influence on the rest of the world, and (2) California could do more good as an independent country than it is able to do as just a U.S. state.
In 2016, the United Kingdom voted to leave the international community with their “Brexit” vote. Our “Calexit” referendum is about California joining the international community. You have a big decision to make.

Yes California is here to help.

THE CASE FOR INDEPENDENCE IN 9 SIMPLE POINTS
Being a U.S. state is no longer serving California’s best interests. On issues ranging from peace and security to natural resources and the environment, it has become increasingly true that California would be better off as an independent country. Here’s a summary of why we think so.

1. PEACE AND SECURITY
The U.S. Government spends more on its military than the next several countries combined. Not only is California forced to subsidize this massive military budget with our taxes, but Californians are sent off to fight in wars that often do more to perpetuate terrorism than to abate it. The only reason terrorists might want to attack us is because we are part of the United States and are guilty by association. Not being a part of that country will make California a less likely target of retaliation by its enemies.

2. ELECTIONS AND GOVERNMENT
California’s electoral votes haven’t affected a presidential election since 1876. On top of that, presidential election results are often known before our votes are even counted. So, why should we keep subjecting ourselves to presidents we play no role in electing, to 382 representatives and 98 senators we can’t vote for, and all the government officials and federal judges appointed by those very same people we don’t elect.

3. TRADE AND REGULATION
The U.S. Government maintains a burdensome trade system that hurts California’s economy by making trade more difficult and more expensive for California’s businesses. As long as California remains within this burdensome trade system, we will never be able to capitalize on the trade and investment opportunities that would be available to us as an independent country.

4. DEBT AND TAXES
Since 1987, California has been subsidizing the other states at a loss of tens and sometimes hundreds of billions of dollars in a single fiscal year. As a result, we are often forced to raise taxes and charge fees in California, and borrow money from the future to make up the difference. This is partly why California presently has some of the highest taxes in the country, and so much debt. Independence means that all of our taxes will be kept in California based on the priorities we set, and we will be able to do so while repaying our debts and phasing out the current state income tax.

6. NATURAL RESOURCES
Certain minerals and other natural resources like coal, oil, and natural gas are being extracted from California at below market value rates by private corporations with the permission of the U.S. Government. While a small portion of the revenue is shared with us, our share has been withheld during times of sequestration. That means the U.S. Government is paying their debts with royalties collected from selling off California’s natural resources. Independence means we will gain control of the 46% of California that is currently owned by the U.S. Government and its agencies. We will therefore take control of our natural resources and be the sole beneficiary of royalties collected if and when they are extracted from our lands.

7. THE ENVIRONMENT
California is a global leader on environmental issues. However, as long as the other states continue debating whether or not climate change is real, they will continue holding up real efforts to reduce carbon emissions. The truth is this country accounts for less than five percent of the world’s population yet consumes one-third of the world’s paper, a quarter of the world’s oil, 27 percent of the aluminum, 23 percent of the coal, and 19 percent of the copper. Independence means California will be able to negotiate treaties to not only reduce the human impact on our climate but also to help build global resource sustainability.

8. HEALTH AND MEDICINE
The Affordable Care Act was enacted by the U.S. Government to lower the cost of health care and expand health insurance coverage to the uninsured, yet millions of Californians still lack access to quality health care because they can’t afford it. For many, access to hospitals and medicine is a life or death issue. Independence means we can fund the health care programs we want and ensure everyone has access to the medicines they need because our taxes will no longer be subsidizing other states. Finally, California can join the rest of the industrialized world in guaranteeing health care as a universal right for all of our people.

9. EDUCATION
California has some of the best universities but in various ways, our schools are among the worst in the country. Not only does this deprive our children of the education they deserve, but it also costs taxpayers billions in social services and law enforcement expenses linked to lacking opportunities resulting from poor education. Independence means we will be able to fully fund public education, rebuild and modernize public schools, and pay public school teachers the salaries they deserve. On top of that, independence means freedom from federal education policies and one-size-fits-all standards set by political appointees on the other side of the continent.

Stanford Jan 2017 - 27%
http://news.stanford.edu/2017/01/19/hoover-golden-state-poll-californians-arent-fond-trump-agenda-arent-interested-seceding-u-s/
Reuters Jan 2017 - 32%
http://www.reuters.com/article/us-usa-trump-california-secession-idUSKBN1572KB
Berkeley March 2017 - 32%
http://www.newsweek.com/donald-trump-california-calexit-suceede-575219
http://www.mercurynews.com/2017/04/04/california-poll-state-trump-approval/
" One person who’s happy with the Berkeley IGS poll results is Marcus Ruiz Evans, a leader of the Yes California campaign, which is trying to convince state residents to secede from the U.S. and start a new nation. The campaign is currently collecting signatures to put a secession measure on the November 2018 ballot.
“It doesn’t surprise us,” Evans said of the data showing more optimism about California than America as a whole. “We’re not saying there’s no issues with Sacramento, but it’s more functional than the federal government. … If people have to choose, they’d rather go with California.” " 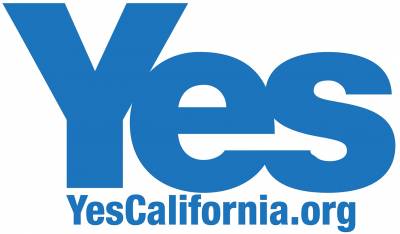