For the people, with the people in the struggle against US Imperialism!

On March 7th, March on the Pentagon (MoP) presented a tribute to revolutionary women of the past and present (and future).

As the founder and national co-director of March on the Pentagon Cindy Sheehan stated in her opening remarks, politeness and pacifism never advanced any struggle, let alone the struggle for the emancipation of women. Even the courageous Harriet Tubman who put herself under great risk to liberate slaves said, "you can't wound a snake, you've got to kill it."

We believe the "snake" is US imperialism and for the planet to survive and for its inhabitants to thrive, it must be destroyed.

The forum was almost four hours, but it can be watched in more manageable chunks.

Big thanks to the revolutionary women who shared with us and special thanks to MoP Co-director Emma (Fiala) Sron for her technical help and skills during the event.

For bios and more info about our wonderful panelists, please
click HERE.

The video is below, and here are the time stamps (plus or minus) for the presenters and their topics:

Cindy Sheehan
Women, Mothers and US Imperialism
02:00 to  40:00 (Including audience participation)

Madelyn Hoffman and Diane Moxley
Women and Alternative Politics under US Imperialism
51:00 to 1:27

Lisa Davis
1:28 to 1:54
Women and the Struggle for Black Liberation under US Imperialism

Emma (Fiala) Sron
1:54 to 2:14
Women and the Community under US Imperialism

Mnar Muhawesh
2:15 to 2:41
Women and the Struggle Against US Imperialism and Israeli Colonialism in Palestine

Lucy Pagoada-Quesada
2:42 to 3:04
Women and the Struggle Against US Imperialism and Sanctions in the Global South

Sue Ann Martinson
Women and the Environment under US Imperialism
3:20 to 3:42

Cindy and Emma Polemicize against US Military Recruitment
3:44 to 3:52
(Important Piece)

After women gained suffrage in Soviet Russia in 1917, March 8 became a national holiday there. The day was then predominantly celebrated by socialist movement and communist countries until it was adopted by the feminist movement around 1967. The United Nations began celebrating the day in 1975. Since our beginning, three years ago, March on the Pentagon (Originally Women’s March on the Pentagon) has been an internationalist organization in solidarity with all women and others around the world who fight to resist U.S. Imperialism. 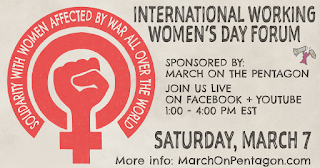