Help Casey Sheehan Prevent others from joining the Military! 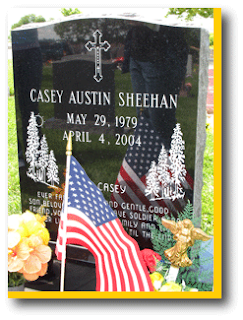 This Saturday, April 04, 2004, is not only the anniversary of the death of Martin Luther King, Jr, but also the 5th year since my son Casey was killed in Iraq. Please read an article that I wrote called 5 Years, here.

I have come to the conclusion, with the deaths in Afghanistan increasing and still continuing in Iraq (not just for our soldiers), and with protests at a bare minimum, the only way we can stop these Robber Class wars for profit is to put a complete halt to military recruitment. As Peace-Activist, Analyst, Ray McGovern said in my recent Soapbox interview of him, Afghanistan will become a "bloodbath."

The World Can't Wait is organizing for the last two months of school in high schools to send its We Are Not Your Soldiers tour into campuses to combat lies of recruiters and the Robber Class Military Industrial Complex. They need about $12,000.00 to do so. A small price to pay for peace. Please donate what you can to this very Noble Cause.

My friends, Peter Dudar and Sally Marr have taken their amazing and effective film, Arlington West into hundreds of schools and have literally convinced thousands of students not to join the military.

Courage to Resist helps soldiers who are already in the military to get out or resist deployment as conscientious objectors.

American Friends Service Committee has a lot of useful downloadable info on its website so you can talk to your children, young friends, or even strangers about the dangers of military life and the US Empire.

My new internet booklet, Myth America: 10 Greatest Myths of the Robber Class and the Case for Revolution has a compelling anti-military enlistment/recruitment chapter called: It is Noble to Die in Robber Class Wars. Read a review of the booklet by David Swanson here. You can still order your copy by making a minimum 10.00 donation to Cindy Sheehan's Soapbox, or by sending a check/money order to: Cindy Sheehan's Soapbox, 55 Chumasero STE 5D, San Francisco, Ca 94132.

I will miss and mourn my son forever, but I can't think of anything nobler that his sacrifice by the Robber Class can stand for, than using his death and our story to prevent others from being so misused. Dr. Martin Luther King, Jr, about one year before his assassination, began to speak out against militarism and wars and he made the connection between state violence and violence in the inner-cities so profoundly, yet 41 years later we still are battling all over the world and our planet's children pay the highest price.

If you do donate to one of the Noble Causes, please send me an email so I will know: Cindy@CindySheehansSoapbox.com. And don't forget that you can send me your Soapbox Rants and Ask Cindy? questions.

Our next show in the Soapbox will have former Colonel Ann Wright and Sara Rich talking about the abuses of females in the military and what we can do to stop them. Statistics say that fully 1/3 of the females in the Armed Forces will be sexually abused, harassed or raped by their fellow male soldiers.