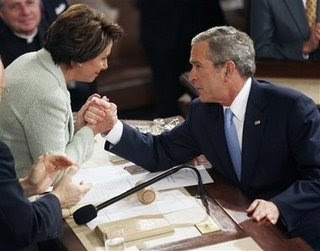 On December 9, 2007, in response to an article in the Washington Post (December 7, 2007) my campaign sent out a press release demanding that House Speaker, Nancy Pelosi, come clean about what she knew about torture and when she knew it.

Not very many people paid too much attention to the article in the WaPo that day, but even less heeded my campaign’s request, especially the Torture Mama herself: Nancy Pelosi.

Now after almost 18 months, why would people suddenly be concerned with this?

First of all, Dastardly Dick Cheney and his traveling lascivious smirk has been appearing all over cable news openly admitting to being an authorizer of torture. Secondly, Republican Pete Hoekstra of the House requested (through the Freedom of Information Act) the CIA memos that showed prominent Democratic leaders were briefed on what the Robber Class Politicians and conspiratorial media call: Enhanced Interrogation Techniques or what Torquemada called “torture.”

Nancy Pelosi is not only the Torture Mama, but she is the insistent “Impeachment off the Table” Speaker of the House that did everything in her power to insure that George and Dick were not held accountable for their crimes.

Why? Because in true gangster fashion, the Bush Crime Cabal brought the Democrats in on their mess: It’s called Robber Class Protectionism.

From Wall Street to Pennsylvania Avenue to the rotten halls of Congress, the Robber Class will protect themselves and each other and make sure not one of them pays for his/her crimes. It’s a sweet deal they have going on: Murder and Torture for Profit and the only reason the Robber Class Media is exposing Pelosi’s complicity is because they also need to make sure that no one, especially themselves as paid Pentagon shills, be held accountable for “mistakes” or downright crimes.

Now Obama and his Justice Department are working overtime to protect the previous torturers and with each passing minute become the very things they claimed to be against. They are all monsters.

Why does anyone still buy into the Robber Class Myth of the “two party” system or that one party is any better than the other? It’s one of the biggest hoaxes foisted on a gullible public hungering for integrity in politics when there is very little to be found.

The Torture Mama won’t be held accountable for her complicity in the crimes of the Bush regime, and with Obama at the destructive helm of our rickety ship of state, neither will BushCo. I would say it was “up to us” to hold the crooks politically accountable by voting them out of office, but that is also a pipe dream solely reserved for an electorate with the courage and integrity to vote with courage and integrity not out of fear and “lesser of two evilism” paradigms. Hmm: do I want Mr. Evil, or Mr. Less-Evil? Are there degrees of evil, or just exploitation of our good intentions that have always paved the way for Evil to reign unabated or unopposed?

Whether you are a Democrat or a Republican, you support politicians who support torture…at what point does the blame trickle down on the people who insist and persist in supporting and voting for one of the Robber Class Parties?

It’s getting close, my friend!
Posted by Cindy Sheehan's Soapbox at 6:15:00 PM