War is Unsuitable for Children: Another YouTube outrage by Cindy Sheehan 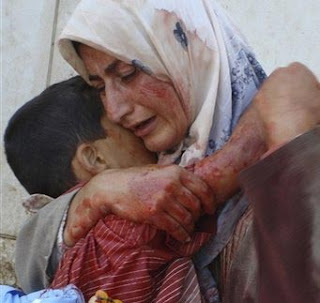 Last week, after being bombarded with pseudo-patriotic images of graveyards, gravestones and flags, I decided to begin posting images of maimed and killed Iraqis, but especially children and transform the mega-pseudo-patriotic Memorial Day to Remembrance of Victims of US Empire Day.

I got a great response to this and my friend and videographer, Clifford Roddy put together a short film called: finaledit, with the images I posted and with images that he took at a national cemetery in Santa Fe, NM where we were together for my Myth America book tour. I have a Cindy Sheehan You Tube page so we posted it there.

The video was just yanked off of You Tube because it “violates the terms of service” but even before it was yanked, it had a warning: “This video is unsuitable for children.”

The pictures of the dead and maimed Iraqi children were gruesome. War is gruesome. War is never pretty but the Iraqi war has been “Sanitized for your protection.” It’s not enough that adult males have been tortured but thousands of women and children have also been imprisoned and cruelly treated.

I think it’s pretty gruesome that the US Military has held up to 6000 juveniles in its torture prisons in the Middle East and there has been rape and torture reported to individuals as young as 10 years old! How can any human being torture another human being, much less a child? These kinds of stories remind me of the most horrendous slasher movies that I can think of, but they are not the pretend product of twisted fantasy, but factual and mind-blowingly real.

Former US Soldier, Steven Green, was recently given life in prison without the possibility of parole for the 2007 rape, mutilation and murder of a 14-year-old girl in Mahmoudiya, Iraq. Not only was Green the ringleader in the rape and murder; the squad also killed her family.

Unfortunately, even though Green was a “bad apple,” the situation we find ourselves in is an entire salad of rotten fruit and incidences like this one are not uncommon, but rarely reported.

Once when I was in Amman, Jordan speaking with prominent Iraqis, a Sheikh told me that US soldiers burst into his home, severely beating him and raping his wife, all in the presence of his 14-year-old son. The Sheikh told me that it was his son’s fondest dream to kill US Soldiers. Can you imagine this happening to your family? What if something like this happened in your home? You’re sitting around watching American Idol, or some crap like that, and Iraqis break into your home and terrorize and brutalize your family? I am sure you would all just chalk it up to “freedom and democracy” and be happy to go about your miserable lives comforted by the fact that your country was being occupied and destroyed for your own good.

During the US-UN-Clinton led sanctions against Iraq, the UN estimates that over 500,000 children died from starvation, disease, or violence. 500,000 Iraqi children would be like 5,000,000 US children dying. Former UN Ambassador under Clinton called that sacrifice for US Empire by the children of Iraq “worth it.” Over one million people have died in Iraq since Bush's invasion in 2003 and most of that figure counts women and children.

I have spoken to men who were still in their teens who were sodomized with broom handles in Guantanamo. I have seen the horrific photos of the US’s inhumanity to man and cannot forgive my country for the terror it has unleashed on the world. I can’t stand the fact that our government operates with such craven cowardice and has harmed so many people while Americans revel in blissful ignorance.

Young people who never get a chance to live their lives have their lives snuffed out so corporations can profit and politicians can earn their John Wayne, muy macho credentials and I wish that we could get a movement going that would be as large and as angry about weddings parties being blown up in Iraq-Af-Pak as they are about inequality in marriage rights here in the US. Please don’t email me with hostility because I wrote about marriage equality: I am 100% for marriage equality, but I am also 100% for people living to be able to be married whether they are gay or straight. Lives are in the balance and our inaction is tipping the scale in the wrong direction.