The New Face of the Anti-War Movement by Cindy Sheehan 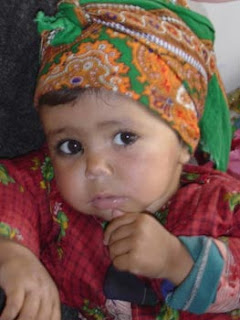 I resigned as the "Face" of the anti-war movement a couple of years ago when I was attacked for trying to hold Democrats to the same standards as I held Republicans. Democrats are obviously not the "Peace Party" and now I think it has been proven that Obama is not a "Peace President."

Since the Democrats have taken back the majority (off of the back of its anti-war base), the situation in our nations' misbegotten wars have deteriorated measurably. Unfortunately, the anti-Bush movement is betraying the children of the world as the Democrats have betrayed it.

Who will speak for the baby in the picture? That baby is as beautiful and as worthy of life and peace as my beautiful grandson, Jonah...who is about the same age.

This baby is the new "Face" of the anti-war movement and should be the rallying image to personalize the politics of peace.

The establishment peace groups should rip down there posters of the war criminal, Obama, with its message of "Hope," because that "Hope" is only a new wrapping for the violent policies of the Empire and what it represents to most people around the world.

I became the "Face" of the anti-war movement because I represented the personal cost of war.

While US troops and US families are still suffering, the new "Face" should be the children of the world who are suffering for the imperial greed of the War Party's violence.
Posted by Cindy Sheehan's Soapbox at 10:15:00 AM