""We are not anti-American, we are anti-Imperialism 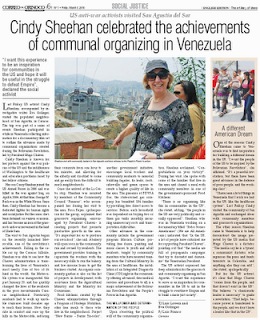 “We are not anti-American, we are anti-Imperialism”
Cindy Sheehan
My request to interview President Hugo Chavez Frias of Venezuela was finally granted on March 2nd while we were down in Montevideo, Uruguay with President Chavez for the inauguration of the new left-ish president and freedom fighter, Jose Mujica.

The reasons I went down to Venezuela with my team of two cameramen were two-fold.

First of all, I just got tired of all the misinformation that is spread in the US about President Chavez and the people’s Bolivarian Revolution. In only one example, the National Endowment for Democracy (another Orwellian named agency that receives federal money to supplant democracy) spends millions of dollars every year in Venezuela trying to destabilize Chavez’s democratically elected government.

The other reason we went to Venezuela was to be inspired and energized by the revolution and try to inspire and energize others in the states to rise up against the oppressive ruling class here and take power back into our own hands.

Empowerment of the poorest or least educated citizens of Venezuela is the goal of the Bolivarian Revolution. President Chavez said in the interview that “Power has five principles” and the first one is Education and he calls Venezuela a “big school.” Indeed since the revolution began 11 years ago, literacy rate has risen significantly to where now 99% of the population is now literate.

People Power is another principle of power and we witnessed this in a very dramatic fashion in the barrio of San Agustin in Caracas. San Agustin was a shantytown built on the sides of some very steep and tall hills—the only way the citizens could get to and from their homes was to climb up and down some very steep and treacherous stairs. Well, two years ago, the neighborhood formed a committee and proposed that the government build a tram through the hills and on January 20th, the dreams of the citizens of San Agustin became a reality and the Metro Cable was christened. Not only did the residents get a new tram, but many of the shacks were torn down and new apartments were built. Residents had priority for low, or no, interest loans to buy the apartments.

Even though I am very afraid of heights, I rode the Metro Cable to the top of the hill and we were awarded with amazing views of Caracas and the distant mountains. All the red, gleaming tramcars are given names of places in Venezuela or revolutionary slogans. But our “treat” was still ahead of us when we made our way down the side of the hill by those steep and treacherous stairs. In combination with the stairs and the heat, by the time we were at the bottom, my legs were shaking like Jello and my heart was thumping. I could not even imagine walking up those stairs! Young children, pregnant women, pregnant women with young children, old people, etc, had to go up and down the stairs to get to an from their homes! With the installation of the tram, the lives of the people of San Agustin were improved immeasurably and it is all due to the education and sense of empowerment that comes from organizing and ultimate victory.

The Metro Cable serves about 12,000 people per day at a cost of ten cents per round trip ticket—and all of the employees come from the barrio.

About 98% of the organizers were women who spoke very articulately and passionately about how their lives have improved since Chavez arose to power from the people’s revolution and how they would defend Chavez and the revolution with their very lives.

Knowledge is power and perhaps that’s why before the Revolution, only primary school was free and fees were charged for secondary education. Now in Venezuela, school is free all the way through doctoral studies. We see how the ruling class in our own country is gutting education and are tying to make it as difficult as possible to get a University education. A smart and thinking public is a dangerous public.

There is so much to write about our trip and about the Bolivarian Revolution that this will have to be a series of articles by necessity. We learned so much!

Also, my complete interview with President Chavez will be available soon in audio and video and then a full-length documentary entitled: TODOS SOMOS AMERICANOS (We are all Americans) will hopefully be available and premiere by June 1st.

There is a very touching scene at the end of my interview with President Chavez when President Evo Morales of Bolivia comes in the room. President Morales was also in Montevideo for Mujica’s inauguration.

With President Morales standing by his side and nodding vigorously, President Chavez said: “We are NOT anti-American, we ARE anti-Imperialism.”

Yo tambien, mis hermanos.
Posted by Cindy Sheehan's Soapbox at 8:43:00 AM