Bolivarian Revolution and US 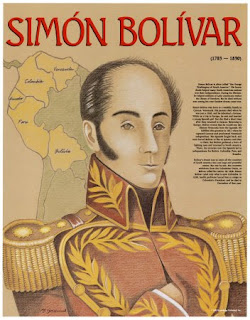 "We are not Indians nor Europeans. ... (but are) Americans by birth,"
Simon Bolivar
On April 19, 1810 (200 years ago), Simon Bolivar(the "George Washington of South America") declared independence from Spain in Caracas, Vz, and started to formulate "Gran Colombia" which was his vision for peace and economic growth for the entire continent of South America.

Being an admirer of the American revolution--where colonists in North America defeated the British to form a united nation that had a common language, religion and customs--Bolivar sought to copy that model in South America.

For about 12 years Gran Colombia was a republic that encompassed a great part of the territory of northern South America and part of southern Central America during the years 1819 to 1831. The present day nations of Colombia, Venezuela, Ecuador, Guyana, Panama and part of Costa Rica were part of this republic of which Bolivar was president.

Most of the Europeans were kicked off of the continent and South America has become a continent of 15 different nations with about 400 million people. For centuries, South America (and Central America) has been a chessboard for geo-political strategies and a region where the U.S. has laid illegitimate claim and has used for economic dumping, pillage, and robbery. The CIA has liberally used the tools of coup and assassination to destabilize the regions against true participatory democracy and the U.S. has supported more than a few evil despots there.

Separately, the countries of South America, are either ineffectual against "il Imperio" to the north, or using their very weakness to align with the U.S. (Colombia) against regional neighbors, thinking such an alliance will bring strength and prosperity. Traditionally, bad things happen in such alliances.

In 1998, Hugo Chavez Frias, was elected from the people to lead Venezuela. In 1999, a new Constitution was written and ratified by the people which instituted the Bolivarian Republic of Venezuela and President Chavez has dedicated his political career and life to a new Bolivarian Revolution. For Chavez this revolution has several stated goals:
“The United States appear to be destined by Providence to plague America with misery in the name of liberty”

Simón Bolívar
Learning about this grass-roots revolution was the driving force that led me back to Venezuela this past February. The U.S. has plagued the Americas with misery, and we up here in The Empire are beginning to acutely feel what other peoples of the world have felt: economic oppression and the theft of liberty; exploiting the terms, "democracy, freedom, and liberty," so much so that many of us up here believe that the Slavery of imperialistic-capitalistic-militaristic society is this mythic "freedom."

Besides Chavez's Bolivarian Revolution, he is also trying to use the ideals of Simon Bolivar to unite Latin America for economic strength and security. He formed ALBA (Bolivarian Alliance of the Americas) which has eight member nations from Latin America now. Recently in Cancun, an alternative to the U.S. dominated Organization of American States (without the U.S. and Canada) was discussed.


Thomas Jefferson, a man whom Simon Bolivar (although he was anti-slavery) held in high-esteem, once said: "God forbid we should be 20 years without such a rebellion...the tree of liberty must be refreshed from time to time, with the blood of patriots and tyrants. It is its natural manure."

Our republic is dying on the vine due to the (sometimes deliberate and stubborn) ignorance and lethargy of We the People. In this day of Corporate Ascendancy over our government and other institutions that corrupt our lives, we should be rebelling more, and blindly obeying these systems less.

The revolution in Venezuela has been achieved in a relatively peaceful manner. There has been some unfortunate bloodshed, but I have talked to many people there who have and will defend the revolution with their own lives. Also, in Venezuela I was impressed by the sharing of power between the people and their government--which, to many, truly feels like a government "by and for" its people and not "by and for" the Corporatocracy.

We are working on a movie called Todos Somos Americanos (We are all Americans) that seeks not only to dispel the ugly and false rumors about Chavez, Venezuela and the Bolivarian Revolution, but is also attempting to inspire people in our country to a healthy, peaceful, people's revolution.