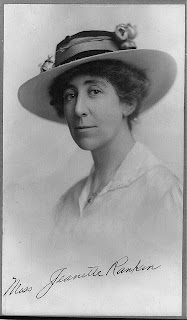 “There can be no compromise with war; it cannot be reformed or controlled; cannot be disciplined into decency or codified into common sense;
for war is the slaughter of human beings, temporarily regarded as enemies, on as large a scale as possible.”

Jeannette Rankin (June 11, 1880 – May 18, 1973), is probably best known (if she is known at all) as the first female elected to Congress in 1917. Ms. Rankin was elected from Montana, even before females achieved universal suffrage in the U.S. Montana achieved female suffrage in 1914.

Unlike the first female who was given the gavel as Speaker of the House in 2007, Nancy Pelosi—Jeannette Rankin was an uncompromising advocate for world peace. Also, unlike Ms. Pelosi, Ms. Rankin did more than give lip service to her feelings of peace—she actually sacrificed much to live out her values.

As an advocate for peace, Ms. Rankin lived through arguably the most warlike decades of this nation’s history.

She was elected to Congress in 1917, just in time to be one of only 50 reps to vote “nay” on entry into World War I—she served only one term in Congress and was gerrymandered out of her district.

Through the years between the “Great War I” and the “Great War II,” Jeannette worked with various peace groups--Women’s International League for Peace and Freedom (WILPF) being the most prominent and long-lived group that continues to this day.

In 1940, Ms. Rankin was returned to Congress from Montana running on an ant-war platform. Citizens of the U.S. were war weary and the losses from World War I had been immense and the pain caused was immeasurable. After the attack on Pearl Harbor on December 7, 1941, Jeannette was the soul Member of Congress to vote against the declaration of war against Japan stating: “"As a woman, I can't go to war and I refuse to send anyone else. It is not necessary. I vote NO." Up until Japan’s attack on Pearl Harbor, the mood of the country was anti-interventionist, but after that, like after 9/11, there arose a rabid nationalism and thirst for vengeance. Ms. Rankin’s vote against the declaration of war was not popular, to say the least.

Rankin’s lone vote against the war reminds me of Rep. Barbara Lee’s (D-CA) cool head and solitary vote against giving killer-Bush authorization to invade Afghanistan after the 9/11 attack, when the mood of the country was once again fervently pro-vengeance.

For her vote Ms. Rankin again lost her seat in Congress and set out in a quest for peaceful solutions to “problems,” and this quest took her to India seven times to study the tactics of Mahatma Gandhi. Like my first PEACE HERO, Albert Einstein, Jeannette Rankin was a proponent of disarmament.

In 1967, Jeannette said, “It is unconscionable that 10,000 boys have died in Vietnam.... If 10,000 American women had mind enough they could end the war, if they were committed to the task, even if it meant going to jail.” She then led a protest in DC in 1968 with thousands of women. Unfortunately, before that war was over (one that she adamantly opposed, to no one’s surprise) millions of people would be slaughtered.

I became aware of this amazing woman when I was involved in a docu-drama about her life called: A Single Woman, written by and starring in the lead role: JeanMarie Simpson—who is also a peace worker. I highly recommend checking this movie out for the biographical information about Ms. Rankin.

Even being a student of history, I had never heard of this singularly remarkable woman.

I am moved by Ms. Rankin’s work because of the undiluted energy she put into it and how she never wavered even under intense pressure. I have faced a fraction of what she had to endure, so I can appreciate and derive inspiration from her persistence in the face of adversity.

It is my belief, that until the governments of the world are filled with a majority of women like Jeannette Rankin and women who tow the line of the status quo of war, like Nancy Pelosi are sent packing, nothing will change and our young people will still fight, die and kill for old people’s profit.

PEACE HEROES IS A SERIES BY CINDY SHEEHAN OF PEOPLE FROM WHOM SHE DERIVES INSPIRATION.
Posted by Cindy Sheehan's Soapbox at 6:31:00 AM