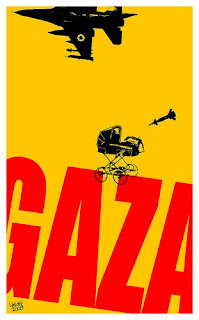 This is a message from Cindy Sheehan's Soapbox and Peace of the Action in solidarity with the FREE GAZA MOVEMENT "FREEDOM FLOTILLA" that is currently under sail in the Mediterranean and approaching its destination to the coast of the Gaza Strip. The 'Freedom Flotilla' is conducting a strictly humanitarian mission and carries a total of 10,000 tons of aid, 800 activists and politicians from more than 40 countries. The occupation and blockade of Gaza, by military and police forces of the Israeli government, is an immoral and heinous campaign of systematic oppression, slowly strangling every aspect of the innocent Palestinian people's basic necessities, infrastructure, natural resources and human rights.


The following statement is found on the WWW.FREEGAZA.ORG website: "The FREE GAZA MOVEMENT is a human rights group that in August 2008 sent the first international boats to land in the port of Gaza in 41 years. We want to break the siege of Gaza. We want to raise international awareness about the prison-like closure of the Gaza Strip and pressure the international community to review its sanctions policy and end its support for continued Israeli occupation."

We ask all people of good conscience to please call/e-mail the US State Department in Washington, DC asking that they actively monitor the status of the 'Freedom Flotilla' and to be in constant communication with the government and military forces of Israel demanding the Flotilla's safe passage in continuing unhindered to their stated destination of the Gaza Coast. No threats or acts of aggression toward the Flotilla shall be allowed. If the Flotilla is acted upon with threats and/or acts of aggression we demand the United States to intervene on behalf of the Flotilla.

To keep aware of the Freedom Flotilla's current status on an hour-by-hour basis please monitor their website at: www.freegaza.org