War is Still a Racket 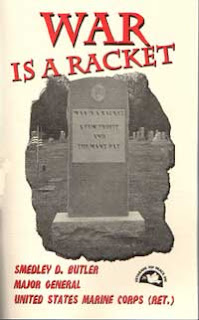 WAR is a racket. It always has been.

By now, most of us are well aware of Ward’s proclamation (if not, click here) that we Mother’s should not send our sons (sic) to kill the sons of other mothers. We have strayed so far away from the original meaning of Mother’s Day, that we might as well call it “Hallmark Hooray Day,” and just let it be what it is. What I am going to write about, however, is the treatise of a military man that I think is profoundly and unfortunately still relevant.

Seventy-seven years ago, Major General Smedley Darlington Butler, Marine Corps, gave a speech entitled, War is a Racket. What made this speech so credible, if not surprising, is the fact that Smedley Butler was the highest decorated Marine of all time. Marines all over still learn about him, but they aren’t taught that he came from Quaker roots and began to castigate the U.S. and its wars of aggression.

I received an email from a person who had read one of my articles and he sent me a link to the treatise, War is a Racket. By the time I first read Butler’s work, I didn’t need any more convincing that Casey died for no reason but profit, but after I read it, I began to understand that the concept of “good war,” was a bogus one. Indeed, Butler says this in the first chapter:

It seems like every generation, more or less, in the U.S. we have a significant war. My generations’ “War on Terror” was Vietnam. Smedley Butler wrote War is a Racket between the “good wars” WWI and WWII.

What also makes this treatise so incredible is that in 77 years, nothing much has changed. If you just change some of the names to the current crop of culprits, it is eerily identical to today.

So as I spend my seventh Mother’s Day without my oldest son on this planet, I want to close with words from Smedley:

Listen to Cindy Sheehan’s Soapbox this Sunday at 2pm Pacific Time for a dramatic reading of War is a Racket.