A Day in the Gulf by Cindy Sheehan 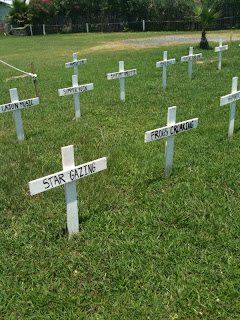 The man in charge of the government that both permitted and abetted the heinous corporate crime (“Drill, baby, drill!”) should, by all rights, be in terminal disgrace. Instead, much of Obama’s “base” behaves as if the First Black President is an innocent party – a victim of circumstances – rather than a facilitator of the corporate enterprise that has spawned the Mother of all Pollutions.

I am in New Orleans at a People’s Emergency Response to the cataclysm in the Gulf. It would be nice if the elitists in the world felt like this was an EMERGENCY, but it’s obvious that the crisis plays into the hands of the globalists and the devastation does not bother them at all except for how this will affect them politically.

World Can’t Wait organized the event in combo with activists in the New Orleans area. We have people from all over the country in attendance. Some people recognize that this is a global catastrophe—not a problem localized to a few shrimpers, fishers and oil workers.

Today, I got an email from James Carville who is from this area and who has been a kind of critic of the Obama administration over the whole “Oil-Cano” incident in the Gulf, and it has a picture of Sarah Palin with “Drill, baby, drill,” superimposed on it. This email is supposed to make us think that the fault of this cataclysm is totally confined to the Republican Party, and more specifically to the right-wing idiot faction of the RP.

What are we supposed to do with this information? Are we supposed to react to this email from the DCCC with horror and be profoundly grateful that McCain/Palin didn’t win? If the Republican ticket got into the White House, there might have been an enormous explosion from a drilling in the Gulf of Mexico that is spewing tens of thousands of barrels of oil into the ocean, threatening life on this planet as we know it?

Oh, that did happen and the administration is Democratic.

We are supposed to forget that the Obama regime granted BP the license to drill where it was in February of 2009.

We are supposed to forget that the Secretary of the Interior, Ben Salazar is a great friend of the oil companies/offshore drilling.

We are supposed to forget that about three weeks before the spill, Obama and Salazar announced a comprehensive offshore drilling plan at Andrew’s Air Force Base with much patriotic hullaballoo.

We are supposed to forget that Obama received more money from BP than any other candidate in the 2008 race.

We are supposed to forget that the US does not have a comprehensive energy program that does not include the use of fossil fuels (coal, oil, natural gas) or the promotion of clean, sustainable and renewable sources of energy.

Like the unnecessary devastation after Katrina, this newest cataclysm began way before the well blew. The years of neglect of the levees and the poor communities surrounding them led to the biggest problems in New Orleans after the hurricane and our decades of devotion to the oil companies that are raping and pillaging our planet led to the Deepwater Horizon catastrophe.

This is truly not a Democrat or Republican problem and conversely the solution won’t come from there either.

I went down to Grand Isle with a contingent from the People’s Gulf Emergency Response Conference and there’s not a whole lot to report. The stench and the taste of the chemicals in the air was pretty bad—except that the locals say that the really bad smell and oil come in the morning and then it’s cleaned up pretty quickly, because that’s the “photo-op” locality. There were also orange booms along the shoreline about 20 feet from the ocean and we were told by security and sheriffs several times that if we crossed those barriers we would have to be “de-conned” and that it “wouldn’t be pleasant.” We heard that the media had moved on to Venice, LA where the slow creep of Armageddon was appearing next.

On the 2 ½ hour trip back and forth to Grand Isle from New Orleans, it was glaringly apparent that fishing and oil are the life of the Gulf—unfortunately, the most destructive one will probably survive without even a pause, and the one that has sustained the region and evolved from generations will die.

Along the main road in Grand Isle, a resident constructed a “graveyard” in front of his home with crosses that had names of things that have been killed by the cronyism between the government and BP.

Some of the Gulf traditions that are dead or dying that were represented by the crosses were: “Stargazing;” “Picnics,” “Frogs Croaking,” “Cajun Music,” “Family Time.”

If I had the opportunity to make a cross, I would have written: “My Grandchildren’s Future.”

We stopped at a Grand Isle diner for lunch and our server was very sweet. She told us that the “berms” that were constructed suit her just fine because she doesn’t want to see the problem or think too hard about her very way of life being destroyed. She looked at us with very weary-teary eyes and simply said: “Thank you for caring.”