PEACE HEROES: The Martyrs of the Mavi Marmara 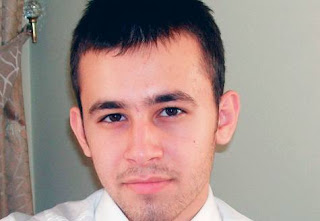 Martyr: a person who is put to death or endures great suffering on behalf of any belief, principle, or cause.

The Free Gaza Movement’s purpose is to break the siege of Gaza and get needed humanitarian aid into that concentration camp on the Mediterranean Sea. I have seen many Israelis blatantly lie in interviews that there is “no humanitarian crisis in Gaza.”

According to reputable NGO’s and other aid organizations: 4/5 of Gazans depend on outside humanitarian aid for survival; 70% are food insecure; there are less than 133 hospital beds for every 100,000 people (less than ¼ the capacity of Israel) with dozens of basic medicines unavailable; because of the profound lack of building materials, homes are being constructed from mud; power is severely limited and Gazans have been isolated from the entire world due to the enormous walls surrounding the region that contains 1.5 million people. Sounds like a humanitarian crisis to me—and indeed, to most people that aren’t easily fooled by Zionist propaganda.

Collective Punishment is the punishment of an entire group of people as a result of the behavior of one or more other individuals or groups and is strictly banned by the Geneva Conventions. This is exactly what the State of Israel is doing to the people of Gaza—with near impunity. Punishing the entire region of Gaza for Hamas is like everyone else in the world getting together to build a wall around the USA and starve us to death because George Bush was “elected,” not once, but twice.

The activists who sailed on the Freedom Flotilla that was brutally attacked by the IDF (Israel Defense Force) that resulted in the deaths of at least 9 people (several are still missing), were not terrorists or terrorist sympathizers—they are sympathetic with the plight of the people of Gaza and have been willing to face the wrath of a psychotically paranoid state to call attention to the blockade.

So many people have died in the struggle for peace and justice all over the world. One of the boats in the flotilla was named after courageous Rachel Corrie, a young American-Jewish peace activist who sacrificed her own life to prevent Palestinian homes from being destroyed by the State of Israel with US made bulldozers. Now, a ship is named after Rachel, and her legacy to free Palestinians from the wrath of an illegal and immoral occupation is still alive.

My own son, Casey, my hero, was also a victim of US Imperialism and arrogance. No matter how hard I struggle, I can’t bring him back, but I hope my efforts help to save other lives and Casey’s legacy lives through my efforts.

What happened to the Martyrs of the Mavi Marmara is beyond tragic—it’s unthinkable and was a shocking act—even for the State of Israel, but it did happen. Nothing can change the fact that at least nine people are dead that should still be here with us today. What is, is. So what do we do about it now?

The autopsy report on the nine confirmed deaths show that 30 bullets were taken from the nine bodies. That’s not self-defense, that’s targeted assassination. From such a negative event, a great positive has occurred—Israel, by this monstrous act, has shone its own spotlight on at least two things: 1) there is no end to its paranoia and its inappropriate and disproportionate reactions, and 2) its barbaric siege on Gaza.

To honor the deaths of the Martyrs of the Mavi Marmara, we must never allow their deaths to be in vain. The Free Gaza and Free Palestine movements must continue to show the courage of the martyrs who were willing to sacrifice even to the “last full measure of devotion” to make the world a better place for the suffering peoples of Gaza.

I stand in awe of such love and commitment as much I wish it wasn’t so, or didn’t have to be so.

This is an installment of Cindy Sheehan’s Peace Heroes.