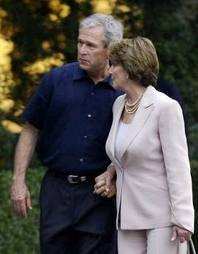 How’s that “liberal agenda” going for you these days?

You have had quite a run as the first female Speaker of the House, haven’t you?

In that almost four years now, you have fully funded the wars; rammed through the bankster bailouts and the Foreign Intelligence Surveillance Modernization Act; refused to hold the criminals of the Bush administration accountable; supported the torture policies of George Bush and wanted even stricter measures against suspected terrorists; obediently supported and defended the murderous Israeli oppression of Palestine; presided over the worst jobs’ hemorrhage since the Great Depression (can you see all the jobless and homeless from your mansion on the hill in Pac Heights?) and the only “victory” that you can claim is a feeble health care “reform” bill that you admit you had no idea what it contained, when in reality, it was just a massive welfare program for your corporate buddies in the industry.

You are going to become a lame duck Speaker early next month when your party loses its majority—now don’t think I am thrilled that the Republicans are returning to a majority, at least in your House, because I think your party and the GOP are just different sides of the same coin—but you can’t say I didn’t warn you back in 2006 that if you and your party didn’t end the wars and hold BushCo accountable that your euphoria would be short-lived.

I literally brought that warning home to you in 2008 when I stood for election against you as an Independent in your district. I again tried to send you the gift of a wake up call through my platform and candidacy that ending the wars;, increasing jobs here in the US; fully funding education; protecting people’s homes from eviction and foreclosure; protecting the environment from destruction; and justice for war crimes were what the people wanted. Nancy, your party’s impending defeat proves that if you ever were in touch with “the people,” that time passed long before you assumed the Speaker’s gavel and when you relinquish the gavel, you will be just another empty lavender pants suit—an obscenely expensive lavender pants suit, but empty all the same.

So you can’t say that I didn’t warn you and your colleagues that the people shouldn’t be ignored. I now realize that the warning fell on deaf ears and was futile, but also that the political game your party and the other party play are far more important to you than the people of this world are, anyway.

With the elections rapidly approaching on November 2, you once again are up for re-election yourself and the people of San Francisco will dutifully obey their Democratic impulses and send you back to DC one more time, no matter how atrocious you have been, (The question of the day, though, Nan, is when you lose your Speakership will you resign your seat? Hey, I know! Maybe you and your good buddy, George Bush, can have play dates in your mutual retirements?) but you do have opponents. I know of two for sure, the firmly antiwar Republican, John Dennis and the firmly antiwar and anti-Capitalist Peace and Freedom Candidate Gloria La Riva.

My good friend, SF politico and former VP Candidate, Matt Gonzalez, has endorsed John Dennis because, as is your custom, you gutlessly refused to debate him. I am also encouraging you (once again, futilely) to not only debate John Dennis, but Gloria La Riva, too.

I like and admire both John and Gloria and support them as human beings who both have the two things that you lack but would have made you a much better person: courage and integrity.

As someone who got a kick in the teeth from the political school of elitism two years ago, I can’t endorse anyone for Federal elections which I believe are only a huge sham and scandal at any rate, but I am convinced that either John or Gloria would represent district 8 in California far better than you have on your best day.

I did warn you many times and I would childishly like to say: “I told ya so,” but there is so much at stake here on proverbial Main Street that I don’t feel like your defeat is going to be a victory (frankly, your party's unlikely victory would also be a defeat for Main Street) for anybody except the non-partisan ruling class that pulls the levers to propagate their agenda and pad their bank accounts at our expense.

In never-ending struggle against everything you represent,