Once Upon a Time in the Evil Empire by Cindy Sheehan 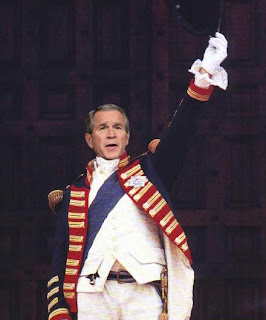 America is a Nation with a mission - and that mission comes from our most basic beliefs. We have no desire to dominate, no ambitions of empire. Our aim is a democratic peace - a peace founded upon the dignity and rights of every man and woman.
Emperor George the III

Once upon a time in the Evil Empire, there arose to the Most Powerful Office in the Land, a very stupidly evil man named, George Walker Bush (the III George of the Empire).
George the III had been a less than mediocre student in school, he failed in every business that he tried to operate and as governor of one of the far-flung provinces of the Evil Empire called Texas, he was an unmitigated disaster. The axe of his executioner swung wildly and he dismantled the education system while ruining the environment.
George Walker Bush was not much different that any other Ruler of the Evil Empire in his Evilness, but the arrogant stupidity of his Evilness began to turn many of the Subjects of the Evil Empire off. What was also so different about George the III was that he stole the office in not a subtle coup, as in previous times, but in an obvious coup that ripped any semblance of democracy to shreds.
In the first year of the Reign of George the III, the Evil Empire was attacked because of its Evil Ways around the globe and George the III and his Consort, Richard the Sick-Hearted, sent the Armies of the Evil Empire to various regions of the planet to murder, rape and pillage, thus causing more hatred and resentment towards the Evil Empire, and anon, the Subjects of the Evil Empire also became very restless.
The Subjects of the Evil Empire rose up in great numbers to oust George and Richard, but the Royal Ass-wipes in the Parliament refused to depose the dictators until the appointed time that they were to leave the Highest Office in the Land.
George and Richard returned to the comfortable lives of the Evil Empire’s Nobility, but when they left, they left two wars raging and an economic crisis that was the worst that the Subjects had experienced in generations.
Lo, and in the Year of the Lord 2008, an Angel appeared unto the Evil Empire (on CNN) and said: "Rejoice, you highly favored Ones! The Lord is with you. Blessed are you among Nations!” And unto the Evil Empire was given a savior: Barack Obama.
The Subjects in the Kingdom of Democrats did rejoice with great rejoicing and the memory of the trials and tribulations of the last eight years receded from Memory—although the trials and tribulations remained.
In the Kingdom of the Republicans, though, the same trials and tribulations that Blinded them during the reign of George the III and Richard the Sick-Hearted miraculously appeared to them and they became most distressed and formed their rage into Tea Parties where no actual tea was served along with the stupidity and racism.
What is the point of this above Fairy Tale? The US is a Mythocracy where the puppets in apparent leadership roles dance to the whims of the real rulers of this country: the Corporatocracy:
Basically, what Economic Hit Men are trained to do is to build up the American empire. To create situations where as many resources as possible flow into this country, to our corporations, and our government, and in fact we've been very successful.
John Perkins (Confessions of an Economic Hitman)


This fact is not a crazy conspiracy theory and the US isn’t the only country run by the super-wealthy—Anti-globalization movements like the ones against the economic oligarchies of the G8, G20, WTO and World Bank understand this simple fact.
Look at the recent democratic uprising in Egypt. The puppet of this global oligarchy, Mubarak, hung onto to power for 18 days, even sending in thugs to kill hundreds of anti-Mubarak protesters, stalling the inevitability of his departure.
Why did Mubarak stay for so long? He told CNN’s, Christiane Amanpour, that he didn’t even want to be “president” anymore, after 30 years of rape and pillage. He stayed, according to a recent article in the UK Telegraph, to make sure his wealth, estimated upwards of 70 billion dollars was secure. Mubarak was not about to beat a hasty retreat without making sure every last penny was securely away from being frozen by Swiss authorities or re-appropriated back to the people he stole it from.
Mubarak was never a public servant of the people of Egypt—public servants don’t amass Pharaoh-sized fortunes. He was given billions of pieces of silver to betray his people and the people of Palestine with this blood money.
The oligarchy’s hand-picked, hand-puppet in Afghanistan, Hamid Karzai, and his family sit on a goldmine for them and their masters: vast mineral deposits and the CIA-opium trade. According to Wiki-leaks documents released late last year, the US is “distressed” at the corruption in Afghanistan and millions (if not billions) of dollars that flow into Afghanistan from US taxpayers, flow right back out of the country to such places as Dubai, where Karzai and his cronies can be assured that if they are chased out of Afghanistan by a popular uprising, their wealth is secured. If the US is so “distressed” by all the corruption and graft in Afghanistan, why is Karzai allowed to remain—it’s not because he has been “democratically” elected in a process that is blatantly fraudulent—no, it’s because he’s a willing dancer with the hand of the puppeteer firmly ensconced in his nether-regions.
There are some nations that are able to remain relatively independent of the global oligarchy and one such nation sits just 90 miles off the tip of Florida: Cuba.
Although Cuba was used as a wedge between the US and the USSR during the Cold War, it has never been a military or economic threat to us—what it is down there is a constant reminder to the Global Imperialists that, no matter how tiny, there are still places that can remain free and survive.
The propaganda about Cuba is stunningly wrong and pathetically obvious, and one doesn’t have to dig too deeply in the mire to find out the truth, but ask yourself this: Why is the US obsessed with Cuba and the Castros when it has supported too many dictatorships in Latin America to count? Why was Allende overthrown in favor of the appalling murderer and oppressor, Pinochet in Chile?
Why is the Empire obsessed with democratically elected and supported Hugo Chavez in Venezuela, yet props up a violent Narco-State like Colombia?
The still recent CIA-backed coup (they’re all CIA backed) in Honduras deposed Zelaya to install a more oligarchy friendly regime, is another example of blatant hypocrisy.
The reason the Karzais and Mubaraks of the world are so beloved by the globalists and hated by the people is the same reason that the Chavez’s and Castro’s of the world are hated by the globalists and loved by their people (and others who have been inspired by their stands)—leaders like Chavez and Castro have insulted this Corporatocracy by insisting that the wealth and resources of their respective countries belong to the people of that nation.
Let’s hope that the uprisings against the elites of this world that didn’t start in Egypt, but was so obvious there, continue.
Our brothers and sisters in Latin America have been doing an admirable, if unsung job, rising up against the puppet-masters from the bottom to the top in some cases.
Here we sit in the seat of the globalist’s wet dream—the United States of America. Ah, America, where the people on the bottom of the economic ladder still think it’s possible to claw, fight, kick, and scratch our way to the top and we won’t allow any pesky facts to get in the way of our quest for this impossible Madison avenue induced nightmare.
If most of us can’t even discern that it doesn’t matter who dances for the elite in the Oval Office, then all is lost before we even begin.
Emperor Obama, and Emperor Bush before him, were installed in their positions by the same institutions that installed Mubarak and Karzai. The difference is, with our complicit media, many of us still firmly believe in the illusion of political “choice.”
The elites of the world never call these people dictators, but their people do.
Will this Once Upon a Time have a happy ending for the heroes? Only the people themselves can decide that.
Posted by Cindy Sheehan's Soapbox at 11:31:00 AM