CORRUPT ELECTIONS R US(a)
My Interview with the Honorable Cynthia McKinney
"The Democrats let the world down"
Cindy Sheehan
What follows is my edited (for length) interview with former Congressional Representative and Green Party Candidate for President in 2008, Cynthia McKinney.
I interviewed Cynthia in a warm studio in Atlanta, Georgia in the summer of 2009—but the interview below is still relevant and fascinating. Cynthia and I are very comfortable with each other and I hope her humanity can shine up from the page to your eyes and into your heart.
Cynthia has been in Libya on a fact-finding mission to discover, then reveal to us what is really behind the US-NATO bombardment of Libya—I encourage all to go here to read her reports.
I supported Cynthia when she ran for president in 2008—and voting for her was the 2nd proudest vote I ever cast (voting for myself for Congress edged Cynthia out a wee bit), and every day that she is dodging bombs, or demonization campaigns, working for peace and justice makes me even more proud of her and relieved that I voted for such a courageous, compassionate and intelligent person—not the dog and pony show we currently have “running” this nation. Obama, like the one before him, plays fast and loose with facts, and the children of others.
In case you couldn’t figure it out:
Cs=me, Cindy Sheehan
Cm=Cynthia McKinney
The Interview 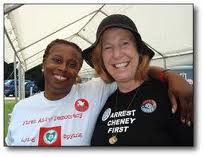