Revolutionary minds: Revolutionary actions.
The time to rise and collaborate is now.
From August 18 through September 4, Cindy Sheehan and the "RevCom" Tour will be touring the West Coast, making stops in, Eugene, Newport, Coos Bay, Hood River, Fresno, and Santa Cruz (with other cities still tentative).
Cindy and the small team of veterans who are accompanying her plan to network and reach out to your communities and showcase the best revolutionary minds and revolutionary actions to the rest of the world.

That's where YOU come in. We want to know what is going on in YOUR community with regards to local farming, local trade, sustainable living, permaculture, trade and barter, your environmental battles, water
issues, responsible community leadership, energy issues and projects, low energy transportation, homeless issues, education, and (m)any other
fronts imperative to our common humanity.
There are two ways you can help:

1) Send us your local (or not so local) recommendations. Include website if available and contact information for your suggestion. Also include a good description of what and why you think we should visit and showcase your recommendation. Your own phone number would be helpful too.
Please send to:
toursuggestions@VeteransForJustice.com


2) Set up a REVOLUTIONARY EVENT that we can attend during our tour. Our schedule is already roughly penned so we'll need to coordinate a date and time that is logistically possible. Set up what works best for your community, and we'll show up and do our best to make
it better.
Again, contact: toursuggestions@VeteransForJustice.com

Cindy Sheehan and non-profit organization Peace of the Action have launched a new, unifying, and aggressive program of action dubbed:

Re-Creating Revolutionary Communities, known as RevComs, seeks to unite individuals and entities on the local level in order to create a national and global front against the domination of destructive capitalism and government cronyism and for steady-state, hands-on approaches generating peace, basic needs, environmental mitigation, and community.

In late 2010, Sheehan informally reached into various activist networks asking individual members to provide analysis, critiques, and other feedback in order to shape the initial context of RevComs. She heard from hundreds across the political spectrum, including from supporters of President Obama ready to abandon him due to his continuation of the
US wars of occupation, expansion of the use of drones in Pakistan and elsewhere, and his Administration’s continued attacks on civil liberties
at home and abroad.
Observing small-scale efforts in the United States and elsewhere known as ‘transition towns’, Ms. Sheehan asked Peace of the Action to mold together the feedback she received with her observations in order to launch the RevCom drive for change.

“We have marched millions of miles,” states Ms. Sheehan. “We have signed thousands of petitions, we have worked for hundreds of candidates who promised ‘change’, and we are still being robbed of our basic necessities and even our children to enrich the capitalist class and empower a corrupt government. It’s time we started to withdraw our
consent to be robbed and take power into our own hands to create healthy, peaceful, and sustainable homes and communities – for our children and grandchildren and for all the children in the world.”

Peace of the Action board member Gregory Vickrey adds, “2011 is a make-or-break year for empowering activists and humanity as a whole to overcome the transgressions of governments at every level and to re-construct the ideals of civic society, justice, and responsibility.”

Re-Creating Revolutionary Communities will spend the year networking, planting seeds of peace, and cultivating those already working on a holistic approach to new paradigm of thoughtful, meaningful, actual change.

Ms. Sheehan concludes, “The future can be beautiful, but it’s up to us.” 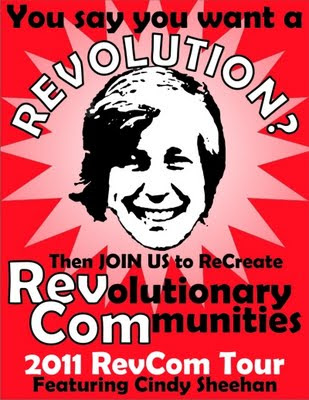