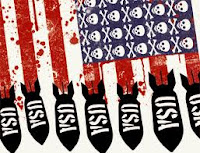 Subtitled: History's Most Ridiculous Interview
While here in Japan, I went to Okinawa Prefecture and met some antiwar, anti-US base activists—they assured me that most people in Okinawa do not like being militarily occupied by the US. The US occupation of Japan allegedly ended in 1951, but many, many US bases still remain.
A “journalist” from Stars and Stripes the newspaper for the US military requested to interview me—I agreed, because in the past, Stars and Stripes has been fair to me and I think it’s important for our troops to read a little bit of the truth, too. Sometimes truth is a hard pill to swallow, but the US military are nothing but “dumb, stupid animals to be used as pawns in foreign policy,” (Henry Kissinger) and cannon fodder for the people who profit off of war. More US veterans are now committing suicide than are being killed in the wars--for such a warlike society, we sure do take crappy care of the warriors.
So, this “journalist” sat down with me and proceeded to attack me and argue with everything that I had to say. I seriously thought that I was going to be interviewed, but I wasn’t—I felt like I was ambushed and a “guest” on the Bill O’Reilly show as this “journalist” from New Zealand would pretend to ask a question, then interrupt me when I tried to answer.
The last straw for me was when he told me that if it weren’t for people “like” me, World War II never would have happened. According to the “Journalist,” the “appeasers” in the global peace movement practically armed Hitler and gave him their blessing to invade Poland. Actually, if it wasn’t for World War I and the Versailles Treaty and the intentional punishment to Germany, there never would have been a WWII—and I am not just talking about a numerical sequence.
I told the “journalist” that the world needed more people “like “me and “less” people like him.
We Peace Advocates and Peace Activists are able envision a world that is free from war and free from killing innocent people. The bottom-line about the use of war to solve problems is that a) the problems are usually manufactured, or made up; b) civilians have become increasingly targeted and comprise the vast majority of casualties; and c) WAR IS BARBARISM. Seriously—it’s the damn 21st Century and nations are still making war against each other?
To be an advocate of barbarism makes one a barbarian—plain and simple. Plain as the shine on the baldhead of the so-called journalist who can’t even imagine a world where “problems” are solved without slaughtering the innocent. I could tell that even the smallest notion of a world without war confused the living daylights out of Mr. “Journalist.” It seems like he and I belong to two completely different universes.
I wish the War Activists of the world would go away and just leave us, and our children, alone—let them all go to a deserted island and kill each other—but, whoops, they don’t actually fight the wars—they just profit and benefit off of them.
So, here’s the secret: WE have to be the ones to protect our own children, and the children of the world, by taking military (dis)service off the table.

I know it’s rough out there. I know jobs are scarce and university is expensive—but, with all my heart and soul and breath—I wish my son, Casey, (KIA, Iraq) was flipping burgers at the local McDonald’s and sleeping on my couch rather than be where he is right now: in a premature grave, never again to laugh, cry, procreate, or just be alive.

War Activist can just go to hell--if the devil will take them.
Posted by Cindy Sheehan's Soapbox at 5:40:00 AM