Punched in the Gut by the Bloody Flag
Cindy Sheehan 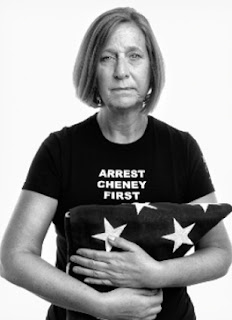 I went to NYC sometime in June (I think it was June, but I’m not sure) to do a photo shoot interview with TIME Magazine about how the events on 9/11 changed my life and what I have been doing since then.
I think most people would remember the exact date of flying from San Francisco to NYC to do such a shoot that included 39 other people in an ambitious project called: Beyond 9/11: Portraits of Resilience, but since then I have been to Italy, Japan, a few places around the U.S. and a 10 day bus tour on the West Coast—but, I do think the shoot was after my Memorial Weekend trip to Venezuela—for sure—maybe.
Anyway, I was told to bring mementos such as my protest shirts, buttons, signs, and things from Casey—so I grabbed what I could and hopped the plane to NYC.
One of the shirts I brought was my very first Cindy Sheehan for Congress tee shirt that had my campaign website on one sleeve, and  “Arrest Cheney First” on the front. The photographer/videographer for the project, Marco Grob, really, really liked that shirt and he shot a lot of pics with me in it and he assured me that he would push the editors hard to pick a photo of me with that shirt—and guess what? I was so pleased to discover that is the shirt that got in the magazine!
I like the photo, which is unusual—I did not like the photo TIME used of me in the end of the decade issue last year and I usually don’t like pictures of myself, but I love this one for some reason.
However, while looking at the picture today, I was struck by a few thoughts—first of all, I am cradling the bloody flag of Empire, which covered my son’s coffin, like it’s a baby. Secondly, when I look more closely, it looks like the flag just sucker punched me in the gut!
Solar plexus punched! That’s exactly what happened on 9/11—the day I feel sealed the fate of my son and millions of others.
I even taped a flag I cut out from my local newspaper on my front window for a few weeks—I NEVER hung a flag anywhere before. On 9/11, though, we were united. Shortly after, though, the policies of the Bush Regime deeply divided us. Instead of re-evaluating our national priorities to see how we could live more gently on this planet and more peaceably with our fellow humans around the planet,  we went hog wild in the Arab-Muslim world and in the process destroyed our own.
On April 04, 2004, that bloody flag landed violently on my modest home in Vacaville, California and I was kicked in the gut and stabbed in the heart by my own country's foreign policy. When I was urged to blame the “terrorists” in Iraq, I rejected that thinking and laid the blame squarely where it really belonged—on the policies of the government that my son allegedly served. My son actually served the Robber Class, but we didn’t know it at the time.
Howard Zinn, my late friend and wonderful, radical historian said that, “there is no flag large enough to cover the shame of killing innocent people.”
This 9/11, those innocents won’t be remembered yet people who unfortunately went to work 10 years ago are called, “Heroes” solely for being in the wrong place at the very wrong time. People like my son will be remembered, but the five-million people of Iraq and Afghanistan who have been murdered, displaced, or wounded are fading into the ugly history of this never-great nation.
As Dastardly Dick Cheney, with the electronic heartbeat, is roaming around the country showing absolutely not one shred of remorse for his murderous regime, it’s important to never forget that the wrong people have been held accountable for 9/11.
It wasn’t the people of Iraq, Afghanistan or Pakistan that perpetrated this great crime and they are the ones who have paid the greatest price—they haven’t just been kicked in the gut by the bloody flag—they have been folded, spindled, mutilated, drug through the wringer and stomped on by US troops and mercenaries who proudly display the bloody flag on their uniforms and equipment.
Instead of being able to wrap themselves in the bloody flag of Empire, Cheney, and the other bloodsucking parasites, (who have confessed to their crimes), are the ones who need to be brought to justice.
Posted by Cindy Sheehan's Soapbox at 7:17:00 PM