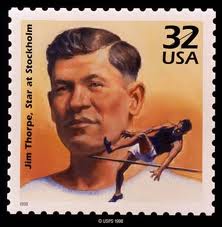 CLICK HERE TO LISTEN TO THE SHOW BEGINNING AT 2PM PACIFIC
(OR ANYTIME IN THE ARCHIVES)
Today, (November 13th), Cindy presents William (Bill) Thorpe, the surviving son of James Thorpe - and Robert Wheeler, his biographer.

Jim Thorpe was a Sac and Fox Indian who was sent to the Carlisle Indian School in Pennsylvania, where he led the football team to victories over some of the nation's best college teams.  From that point, his career was well launched.  In 1912 he participated in the Olympic Games in Stockholm, winning both the decathlon and pentathlon.

King Gustav V of Sweden dubbed him "the world's greatest athlete."  Ironically, Thorpe's Medals and record were stripped by the IOC after they decided he had played baseball during 1909 and 1910 to earn money as a college student.  Afterwards he became a professional athlete - eventually becoming the first President of the National Football League, upon its foundation in 1920.  He died and was buried in 1953 - and so began the final conflict saga in his EPIC story, an issue of where he can be laid to rest

The case is still being litigated, and the brothers William and Richard [Thorpe] as well as the Sac & Fox Nation have joined the fight for the return of Jim Thorpe's remains to Oklahoma.  Please remember: the 2012 Olympics will mark the 100th year anniversary of Jim Thorpe's victories at the 1912 Olympics.  Listen in [above] to Bill [Thorpe]'s, Robert [Wheeler]'s and Cindy's carefully nuanced commentary !  !

(SPECIAL THANKS TO PRODUCER, MIKEY, FOR PUTTING THIS SHOW TOGETHER AND HELPING CINDY WRAP HER MIND AROUND THE SUBJECT).
Posted by Cindy Sheehan's Soapbox at 11:06:00 AM