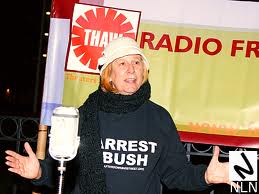 It’s not a secret, and hasn’t been one for about 8 years now, that I am a conscientious tax objector. It’s also no secret that the IRS has been on my case about it recently.

So, tonight I was having coffee at a local restaurant with an activist/friend and we were chatting about some very sensitive issues when a man wearing a blue long-sleeved shirt and tie approached our table. I thought that it might be the manager of the restaurant but he said, “Hi Cindy, I am Cornell from Channel 10 News in Sacramento.”


Sometimes it happens that members of the media recognize me and say “hi” when their presence has nothing to do with me, so I shook his outstretched hand and replied, “Hi, what are you doing here in Vacaville? Just passing through?” He said, “No, actually I am here to talk to you.”

I have been pretty quiet lately, working on my radio show and trying to promote my new book, so I was rather shocked by this ambush and said so.

Cornell informed me that he was there to talk to me about the “lawsuit that the US attorney filed against you in Federal Court.” Turns out that the lawsuit is on behalf of the IRS and that was not the first time that I found out something important about my life from the media.

My next question to Cornell was how did he know where I was? Simple, he went to my home and my daughter told him. That is another issue—no one has the address where I live right now, but apparently the IRS told Cornell where to find me. Isn’t it nice of the IRS to tell the media where to ambush me before they tell me that the US Attorney is suing me?

I did talk to Cornell on camera but I did not tell him anything that I haven’t been publicly and loudly saying since my son was killed in this bloody Empire’s illegal and immoral war in Iraq: I made a moral decision to refuse to fund the Empire’s crimes, tortures and wars. I have not been hiding from anybody and am fully accessible and easy to find (obviously).

It’s been stated by the perpetrators and proven repeatedly that the Bush regime manufactured and manipulated the “intelligence” to rush this nation and the people of Iraq headlong into disaster. My son and hundreds of thousands of other people still should be among the living. At this moment, I am only talking about the Bush years and Iraq but, this Empire has been out-of-control for generations—ask our indigenous people about that, if you can find any.

Let’s cut through all the bullshit.

There is no monetary value large enough that can be placed on a human life or the love of a mother for her child.

I consider that my debt to this country was paid in full when my son, Casey, was recklessly with no regard for his safety (remember the rush to war with the “Army you have” which was not properly trained or equipped?) murdered for the lies of a regime, whose members (Bush, Cheney, Rice, Rumsfeld, Yoo, Wolfowitz, Perle, etc.) roam around the world free and unfettered by threatening prosecutions or persecutions after committing war crimes, crimes against humanity, crimes against the peace, and high crimes and misdemeanors against our own Constitution.

After the interview with Cornell was over, he said to me, “you appear so calm, most people would be freaking out if the US Attorney filed a lawsuit against them.” I replied, “Cornell, what are they going to do to me? Kill another one of my children (god forbid)? I had the worst thing happen to me that could happen to any mother and I am still standing.”

Obviously there are "Two Americas" especially in the "justice" system. Justice is supposed to be blind to such things as race, religion, or income status, but what she really is blind to are the violent and outrageous crimes committed by the 1%. However, I see nothing but opportunity in this new development. When those papers were filed against me—the Feds did something that I have been trying to do for years—put its evil, illegal, and immoral wars on trial.

The Feds have thrown down the gauntlet against someone who has absolutely not one ounce of fear of them, and when it’s over, they’ll know they have been in a fight.

I would say, “Bring it on,” but I am not about to quote the barely functioning killer that murdered my son and so many more and who is also being protected by the very same agency that is persecuting me—Obama’s DOJ.