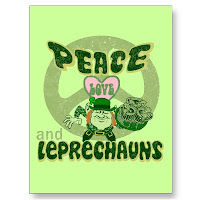 Today finds me back in Dublin, ireland--after a very long but productive tour of Ireland, Northern Ireland and Stockholm, Sweden.

I am actually observing a day off today as I check one more thing off of my "Bucket List:" St. Patrick's Day in Ireland.

Our friend, Cynthia McKinney, is once again filling in for me as guest host of The Soapbox, and she invited super-controversial, Gilad Atzmon, to be her guest.

Gilad is a former Israeli Jew who works for Palestinian rights and is in the U.S. touring with his new book, The Wandering Who. There is much controversy following him around the U.S. everywhere he goes.

If you love him, hate him, or haven't heard of him, I suggest you listen to the show beginning at 2pm Pacific time on March 18th...

The show will be availiable at Community Progressive Radio at 2pm Pacific, or in the archives at Cindy Sheehan's Soapbox
from there forward.

I am heading back to the States on Sunday and I will hit the ground running on Monday as it seems the Empire is growing ever more violent.