Peace is not for Wimps by Cindy Sheehan

Peace is not for Wimps

I am on an overseas trip to Ireland, Northern Ireland, and Sweden invited by the Free the Cuban Five Committees of Ireland and Sweden. On days two and three of the trip, I was very excited to go to Northern Ireland as I have never been there before and there is, of course, a deep tradition of struggle and a hard, hard won peace--with reconciliation being an ongoing process.

I learned so much in Northern Ireland about the “Troubles,” as I met and spoke at length with members of the Peace People and Sinn Fein; some with ties to the Irish Republican Army.

Whew! The process contained so many nuances and secret negotiations that I learned of as I sat soaking up the history at the same kitchen table in Derry (Bloody Sunday) at the Hume home, where Gerry Adams of Sinn Fein and future Nobel Peace Laureate, John Hume, leader of the Social Democrat and Labour Party (SDLP), met off and on for five years trying to hammer out a peace accord that would work for everyone in the North. John Hume is unfortunately not very well, but meeting him and hearing about his historic work from himself was very inspiring.

I also met with Mairead Maguire (listen to our Soapbox interview with Mairead recorded on July 19, 2009 after she was put in Israeli jail for trying to break the blockade of Gaza) who founded Peace People after the tragic death of three of her sister’s children who were killed when a British soldier shot an IRA member in the head while he was driving and the car careened out of control wiping out the family. Mairead is also a Nobel Peace Laureate. I was honored to speak at the Peace House in Belfast that she founded using her monetary award.

I had a lovely meeting with Martin McGuinness who is a member of Sinn Fein and who is Deputy Prime Minister of Northern Ireland. We met at the Stormont, which is the Northern Ireland assembly—grounds sold to the Crown in the 1920’s by a noble to build the government seat.

Martin told me that Tony Blair was a good friend of his and so, when the drums of war were pounding for a US/UK invasion of Iraq, Martin and Gerry Adams (current President of Sinn Fein and someone also deeply involved in the peace process) went to 10 Downing Street to meet with Blair and to encourage him to forget about this insane idea of his to go along with the Bush regime like the good poodle he would become.

Martin told me that Blair’s Chief of Staff said not to worry because they would be “in and out of Iraq in three months.” Martin and Gerry feared that it would be years, if not decades. Here we are in 2012, and the US is firmly entrenched in Iraq and, although some troops have pulled out, don’t seem to be leaving that war torn country any time soon.

From the office of the Peace House, I did an interview with the BBC. I don’t like the BBC and I usually have distasteful experiences, but it has such a huge audience, I try to swallow my distaste and just do the interviews. Seamus, the host, didn’t disappoint me—he was just like all the rest--combative and sensationalist.

At one point he asked me something like this: “Cindy, given the fact that the Military Industrial Complex is so large and powerful, what kind of impact do you think not paying your taxes has on it?”

Well, at least I can read the latest act of horror committed by my country or its adjuncts and think to myself, “at least I didn’t fund that.” How can one say he/she is against war and other atrocities, yet pay for them? And Seamus was right, withholding my money and using it for good rather than evil doesn’t seem to be slowing down the war machine even a little bit, but what if conscientious war tax resistance were a movement and not a statement by just a few?

After that interview with Seamus and the meeting at the Peace House in war-torn, but healing Belfast, I received an email from one of my attorneys who is helping me with my tax issues telling me that my hearing before a magistrate to try and force me to comply will probably be on April 19th in Sacramento.

At the meeting at the Peace House, a gentleman asked me if I would go to prison rather than pay my taxes.

I don’t want to go to prison in the USA—that’s one of the last things in the world I want to do. I don’t think that it will come to that, but my answer to the gentleman was, “Yes.” This is one of the multitude of reasons why:

The other day, I saw a video report from the BBC, not some left wing anti-Semitic, radical news source, that told about an Israeli soldier that lined three sisters ages four to eight up against the side of their home in Gaza and shot them—killing two and crippling the four year old. By conservative estimates, the US gives Israel ten million per day for military aid. Would I rather go to prison than fund the murder of these young girls and millions more?

That’s not a hard choice for me.

In Belfast, the British troops finally left, forced out by a combination of non-violent protest and armed struggle.
Tax resistance is one of the most non-violent forms of resistance that I can think of: One that can make a profound difference.

I hope we can Occupy Peace and grow the tax resistance movement to really and non-violently make a difference.

We must ask ourselves if funding the execution of babies is something that our moral center is comfortable with.

Tax resistance does not have to take an "all or nothing" approach.

I warmly invite and encourage you to check out the website of the National War Tax Resister's Co-ordinating Committee for more information. 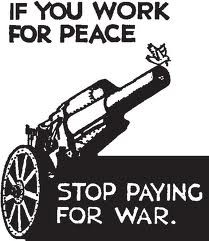