Five Days for the Cuban 5 in WashedUp, DeCeit

I was invited to Washington, DC (WashedUp, Deceit) for the Five Days for the Cuban 5 by the International Committee to Free the Five.

The first event I attended (with my friend, host, driver, author, fellow radical, and Gold Star Aunt, Missy Beattie. Click here to read her article about the Five), was a luncheon at the Cuban Interests Section (de facto embassy, since the US and Cuba do not have formal relations) with the Ambassador from Cuba to the US, Jorge Bolaños, and I was honored to be given a place of importance right next to the Ambassador. The luncheon was to honor activists, artists, filmmakers and authors who have devoted at least part of their time to ending the unconscionable and anachronistic US embargo of Cuba and to educate for release of the Cuban 5.

On the following day, April 21st, we held a rally in front of the White House with over 300 people entitled, "Obama give us 5." 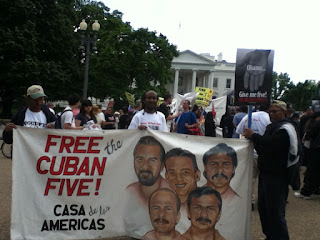 The closing event was held at the Venezuelan Embassy where I was the keynote speaker. Everyone in attendance was well aware of the case of the Five, but what I wished to do was to energize people who are already busy and devoted to Cuban and Latin American activism to help us make the US the hub of this activism since our country is leading the world in anti-democratic actions in that region (and, indeed, many others).

While at the Venezuelan Embassy, I received two wonderful surprises--I was able to speak with one of the Five, Gerardo Hernandez, who was given two life terms for "conspiracy to commit murder" who called from his prison in California; AND I was presented this award (pictured below) from the Five. 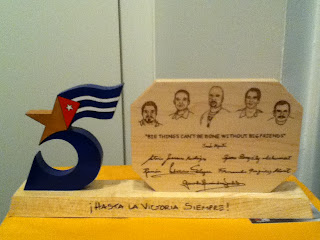 TO Cindy Sheehan,
with regard and sincere appreciation
for your continual solidarity
with the cause of the Cuban 5.
April 2012

This is a super-excellent article about the case of the Five linked here by Stephen Kimber who has been researching the case for years since he visited Cuba in 2009.
Posted by Cindy Sheehan's Soapbox at 11:16:00 AM