When the IRS takes Cindy Sheehan to court to try to force her to support the war machine that killed her son, other war tax resisters from Northern California will be standing with her.

SACRAMENTO, CALIFORNIA – 9 APRIL 2012 – When the IRS takes Cindy Sheehan to court to try to force her to support the war machine that killed her son, other war tax resisters from Northern California will be standing with her.

On April 19th at 10:30 a.m., the IRS will ask a judge of the U.S. Federal Court, California Eastern District (501 I St., Sacramento) to compel Cindy Sheehan to give them information that would help them collect money from her. Northern California War Tax Resistance supports Sheehan's continued refusal to cooperate.

Cindy Sheehan is not waiting for Congress to shut off the spigot of funding for war and militarism – she's taking a stand of conscience by refusing to pay the taxes that make the wars possible. And she's not alone: war tax resisters across the country are refusing to pay into the Pentagon's budget.

Among them are members of the group Northern California War Tax Resistance.

“I wish more anti­war activists would put their money where their mouth is like Cindy does,” says David Gross, 43, of Berkeley, California. Gross hasn't paid any federal income tax since 2003. “I didn't feel like I could really say I was against the wars until I stopped supporting them with my tax dollars, so I decided to stop paying. Now I put all of my energy on the side of my values instead of being a reluctant part­time worker for the Pentagon.”

Jan and David Hartsough of San Francisco, California, have been resisting the federal telephone excise tax since 1968, and today they also refuse to pay half of their federal income tax. “The U.S. Government has already taken Cindy's son for the immoral and illegal war in Iraq,” David says. “She should not in addition be forced to pay for other mothers' sons to kill and be killed in Afghanistan.”

“This year I'm celebrating 25 years of refusing to pay war taxes to the federal government,” says Jon Marley, 50, of Berkeley, California. “I choose this kind of civil disobedience because I believe it is morally wrong for the U.S. to spend nearly 50% of our taxes on murder, torture, and rape in places like Afghanistan and Iraq. We should be using those dollars for projects that provide housing and food and education and health care. Cindy Sheehan understands this, and that's why she has my full support in her brave stand as a war tax resister.”

“How many of our sons and daughters must die in faraway lands? And how many faraway sons and daughters must die at their hands?” asks war tax resister Susan Quinlan of Berkeley, California, who has been resisting taxes since 1981. “Thank you to Cindy Sheehan and to the other mothers and fathers who say 'no!' to this military madness! Not our children, not their children, and not with our taxes!”

Martha Cain, of Berkeley, California, says: “[Former U.S. Secretary of State] Alexander Haig said [of anti­war protesters], 'Let them march all they want as long as they continue to pay their taxes.' Cindy Sheehan interpreted this advice and acted on it. I support and admire Cindy for her courage and commitment in refusing to pay for more violence in this world.”

“I refuse to allow any of my tax money to be spent on wars, torture, rape, and killing people for whatever excuse the government and our corporations want to make up,” says Xan Joi, of Berkeley, California. “To attempt to force Cindy Sheehan to pay for this war on Iraq that actually took her child’s life is unconscionable, immoral – and demanding that she participate in supporting, condoning, and accepting the murder of her own child – let alone other mothers’ children. I feel so tender toward the women of this nation and other nations that I will not allow myself or others to injure their sons and daughters. Cindy Sheehan is a courageous mother who is refusing to be bought by the greed of our nation. I support her stands.”

“I have been resisting the military portion of my income taxes since Vietnam,” says Lorin Peters, 69, of Lafayette, California. “For two reasons: our military is being used for domination and empire, and not for defense; [and] nonviolent defense works better than violent defense, as was demonstrated by Gandhi and others.”

Sheehan appreciates the company: “I would like this to be a movement,” she says. “There are many, many people who are conscientious tax resisters around the country, but I think we need to make it a movement with more and more people joining us. There are many ways people can be conscientious tax objectors. You don’t have to do it 100% like I do.” 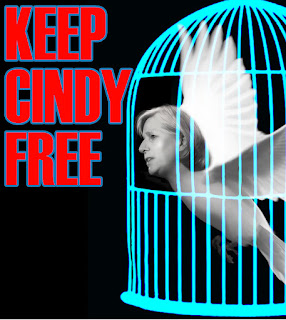