Conscience and the Constitution: They Fought on their own Battlefield

Conscience and the Constitution:
They Fought on their own Battlefield
(Report on my meeting with the feds May 9, 2012)
Cindy Sheehan

"A wo(man) is rich in proportion to the number of things s(he) can afford to let alone." Henry David Thoreau


I had Round X (X representing an unknown quantity) with the IRS/US Attorney today at the US Attorney's office in Sacramento.

The meeting was to try and discover my alleged assets so the IRS could collect approximately 105 grand in taxes that it says I owe for 2005 and 2006. I am not so naive to think that the IRS, using a number of resources or any of the secretive alphabet agencies, doesn't know every single thing about me. However, I refuse to participate in my persecution and furthermore, I should be constitutionally protected from such a thing.


The US Attorney in charge of the case is based in DC and she was on a conference line along with another US Attorney based out of DC who "just happened to be in Sacramento" today, the Revenue Officer Arteaga and the court reporter. My amazing attorney, Dennis Cunningham and I rounded out the little meeting.

There was no ruling from the Magistrate at my hearing on April 19th whether I could use a "blanket 5th" for the IRS form 433-A, but we agreed to meet with the IRS on May 9th (today--as of this writing) to do a "line by line" answer for my "assets." Basically, every answer was "No" or "Zero," but I do receive contributions for my books and speaking that pay the expenses for Cindy Sheehan's Soapbox and which allow me to be a full-time activist...so I did take the 5th on my bank account records. Confirming my suspicion that the feds either want me to perjure or incriminate myself, after I answered "no" to the automobile question, the Revenue Officer pulled up my DMV record showing that I owned a Toyota Camry--which I transferred to my son last year after his only form of transportation died on him. It was barely my car anyway as I also try very hard not to purchase fuel. I had the feeling that I was asked many questions that the feds already have the answer to. At this point, I have a feeling that my non-existent bank account in the Cayman Islands or Switzerland is being sought out. Good luck!

The meeting lasted a little less than an hour and I exited the conference room before my attorney did to go to the waiting room--however, on my way out I saw a very significant poster taped to the Exit door of which I quickly snapped a picture using the camera on my phone (all other cameras are confiscated at security): 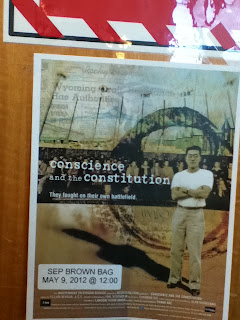 There's glare on the photo, but the poster was advertising a "brown bag lunch" talk that was scheduled to begin just minutes from the time I took the picture.

"In World War II, a handful of young Americans refused to be drafted from an American concentration camp.


They were ready to fight for their country, but not before the government restored their rights as U.S. citizens and released their families from camp. It was a classic example of civil disobedience -- but the government prosecuted them as criminals and Japanese American leaders and veterans ostracized them as traitors.


CONSCIENCE AND THE CONSTITUTION delves into the heart of the Japanese American conscience and a controversy that continues today. Experience the choice faced by any group when confronted by mass injustice -- whether to comply or to resist."


It's a story of the collaborators in the Japanese-American communities and the resisters. Ultimately, one in every nine of Japanese drafted out of the internment camp at Heart Mountain, Wyoming joined the resistance and formed the Fair Play Committee. Seven of the leaders, and one journalist, James Omura who took up the cause in editorials, were tried for "conspiracy to counsel draft evasion."


Here's the most interesting part of the summary of the case to me (as someone performing a Civil Disobedience around my tax issues and who performs CD on a regular basis):


"The government then tried the seven leaders of the Fair Play Committee and journalist James Omura for conspiracy to counsel draft evasion. The jury convicted the resistance leaders but acquitted Omura on the First Amendment freedom of the press. On Christmas, 1945, the Tenth Circuit Court of Appeals in Denver threw out the convictions of the FPC leaders, ruling their jury improperly ignored civil disobedience as a defense. The U.S. Supreme Court refused to hear the appeal from the resisters in the mass trial; and they served more than two years and were released in 1946."

Recently, I read where torture-professor, John Yoo, was given immunity for his part in formulating the Bush regime's torture policies specifically around the Jose Padilla case. Of course, Yoo's definition of torture in his 2002 memo excluded everything but "organ failure." What the hell? Some supposed Constitutional lawyer writes a memo that becomes policy and he is "immune" from being sued by one of his victims because the tortured person lived, but because I refuse to fund torture and other crimes, I am being persecuted?


Another little tidbit that I received today says that the man who (the buck stops there) was ultimately responsible for my son's wrongful death in Iraq is requesting 1.3 million taxpayer dollars (excluding SS protection) for postage, phone calls, travel, etc as a retired president. I am supposed to help pay for a comfy retirement for the man who ordered by son to go to a war based on his lies and the lies of his subordinates?


I have purposefully chosen a very simple and contra-USAian lifestyle and I refuse to help make George Bush's life easier--or any of the others for that matter. Looking at my income immediately post-Camp Casey, I realize that I am fully capable of remaining a part of the Peace Industrial Complex and earning a comfortable living myself--but my own conscience requires me to fight on a battlefield of my own choosing.


I am not recounting my struggles or battles because they are the main focus of my life or because I want sympathy--I report them for a historical record that is true, for one thing, but also because I want people to join me in the struggle.


Whether it is being a war tax refuser or crossing some imaginary line onto an Air Force base to protest the launch of an ICBM delivery test missile, there is comfort and courage in numbers.


As always, I refer you, wonderful reader, to the National War Tax Resister's Coordinating Committee (NWTRCC) website for more information and I want to close with an email I received the day before my last court case with the SUBJECT line of: I APOLOGIZE:


Hi Cindy my name is Dave.  I hope this email reaches you because I have to apologize to you.  I have to apologize for being a STUPID neo-con until three years ago when I overcame my cognitive dissadance when I noticed that I hated the policies of Obama and had the GUTS to call myself to the carpet because Bush was the genisis of what I so despised about Obama and therefor you.  Now I admire you and your unwavering boldness for standing up for me during the Bush regime when I was too polarized by partison politics to recognize the destruction of my own country and civil liberties.  I demonized you and had no regard for the unthinkable loss you endured at the hands of that criminal regime.  Like you my old "teamates" laugh in my face but because of people like you I just grow stronger and now I dwarve them in knowledge because I'm able to see the whole game from a non partison perspective.  Because of you I WILL NOT pay another tax to this empire of destruction.  Thank you for being so principled and showing everyone what a sham the whole left/right paradyme (sic) really is.  On another note I recommend you touch base with Joe Bannister as there is no law on the books regarding the income tax or the IRS in general.  Again, my apologies, Dave (full name withheld). [sic]


Dave made my day as only such a personal act of solidarity is able to!


"Disobedience is the true foundation of liberty. The obedient must be slaves."