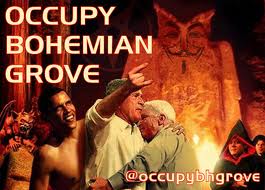 There are probably three wacky conspiracy theories for every one realistic account of the Bohemian Club. It doesn’t help that what happens every summer at the Club’s “Grove” campground along the forested banks Russian River in Sonoma County includes a bizarre mix of silly druidic rituals that only feed the rumor mill of Satanism and sexcapades. The proliferation of wacky stories about the Grove gathering are unfortunate because the truth about the Bohemian Club is fascinating and important, especially today with the entire nation focused on growing inequality and the undermining of democratic processes by the wealthy elite.

The Occupy Movement has revived a once annual counter-mobilization against the infamous summer camp for the 1%, and so this year, as they did throughout the 1980s and 1990s, activists with the Bohemian Grove Action Network hope to subject the Club and its members to intense public scrutiny in order to talk about what the Club really is.

For those who don’t know, the Bohemian Club began in 1872 as an artists and writers society with its own wilderness retreat, a place men could drink beer alongside each other, fraternize over art and philosophy, and urinate outdoors in the duff. The Club was soon colonized by San Francisco’s nouveau riche businessmen, mostly bankers, lawyers, merchants, and construction magnets who were accumulating enormous fortunes by monopolizing real estate, cattle, agriculture, financial services, and other needs enormously stimulated by the Gold Rush.

The Bohemian’s clubhouse, still located on lower Nob Hill at Taylor and Post streets, quickly turned into an exclusive watering hole catering to white, wealthy men. Even so, the Bohemian Club has always sought to include a few genuine “bohemian” artist types —musicians and actors mainly— to spice up its “High Jinks,” serious theatrical performances, and “Low Jinks,” comedic plays produced for the fraternity’s enjoyment.

As the Bay Area became an increasingly important center of financial, industrial, and military power up and through World War II, the Club’s membership more and more began to represent this power elite. Membership rosters from years past include former and aspiring presidents (Nixon, Reagan, Bush I and II), captains of industry (three generations of Bechtels, William Randolph Hearst and his grandson William Hearst III, the Koch Brothers), bankers and investors galore, generals and foreign policy advisers (Colin Powell, Henry Kissinger), and other grand poobahs.

The main beef that many have with the Bohemian Grove is that members engage in discussions about important public policy and business issues that will affect millions, but they do so from behind a well-fortified screen of redwood trees and armed guards. Activists say the Club represents America’s worsening inequality and decaying democracy like few institutions do.

“They’re not just cavorting around a peeing on redwoods,” said Mary Moore, an organizer with the Bohemian Grove Action Network. “They’re giving two serious talks a day up there. The way you learned about how important decisions get made in civics class isn’t the way it really plays out.” According to Moore and others who have tracked the Bohemian Grove camp for several decades, club members give “Lakeside Talks” touching on important subjects like foreign and economic policy. Moore said that the powerful come together at the camp to make decisions, and that in the supposedly social atmosphere, big ideas in politics and business get hatched. Moore worries about the absolute lack of public access to what is officially a private men’s club. “It’s the ultimate backroom on steroids,” said Moore.

The titles of past Lakeside Talks have been leaked after the fact, and they include such heavy subjects as “Preventive Defense & American Security in the 21st Century,” delivered by Bill Clinton’s Secretary of Defense, and “American-Russian Relations — Is the Honeymoon Over?” from a Stanford Professor who later became President Obama’s Ambassador to Russia.

Richard Nixon gave one of the most famous Lakeside Talks in 1967. In his memoirs Nixon called his speech, “an unparalleled opportunity to reach some of the most important and influential men, not just from California but from across the country.” Of course it was a great way for the presidential candidate to ingratiate himself with the U.S. ruling class, to show he was one of them and would guard their interests against the hippy and Black barbarians at the proverbial gates clamoring for equal rights and an end to the war in Southeast Asia. 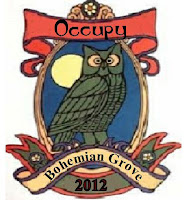 Moore says she doesn’t know who will be in attendance this July when the Grove camp kicks off, or what the subject of the Lakeside Talks will be. “We’ve always gotten the attendees list after it starts. Back in the day we had a worker up there who leaked it to us each year.”

Others who have closely studied the Bohemian Grove aren’t so sure the Lakeside Talks are really the backroom policy sessions many say they are. “Despite the suspicions of many on the Right, and a few on the Left, [the Bohemian Grove] is not a secret meeting place to plot, plan, or conspire,” wrote William G. Domhoff on his web site accompaniment to his classic book Who Rules America? Domhoff published one of the authoritative studies of the Grove in 1975 and ultimately concluded that the Club is mainly an institution for ultra-wealthy men to socialize in the company of one other, while pissing on ferns and redwoods of course.

“The most important decisions typically happen just where we might expect: in the boardrooms of corporations and foundations, at the White House, and in the backrooms of Congress.” Domhoff’s main point is that the Bohemian Club itself isn’t a place where important decisions get made, but rather a place where the ruling class fosters and maintains its own “cohesiveness” which is a prerequisite for “class domination.” It’s one of a few dozen institutions where the global political, economic, and military elite gather to bond with one another and foster a sense of upper-class consciousness.

The activists planning a counter-event during this year’s Bohemain Grove encampment don’t disagree on that last point. The Club’s function as an instrument of class domination is just a further reason to protest its existence, they say.

This year marks something of a revival for the Bohemian Grove Action Network. “The last big protest we did was in 2001, when had about 1000 people,” said Moore. After that, a decade of mostly silence ensued, and the Grove’s men were able to enjoy their jinks, and talks, and redwood urination in peace. Moore says that about six months ago she began getting phone calls from various Occupy organizers across the country asking if her group planned a protest this year to expose the brotherhood of the 1% at its favorite hideaway.

Along with Occupy groups in Santa Rosa, Arcata, Petaluma, Sebastopol, and even Portland, Oregon, the Bohemian Grove Action Network is planning to flip one of the Grove’s oldest and most bizarre ceremonies on its head. To kick off the camp each year the Bohemian Club carries out a “cremation of care,” a mock ritual with Wagnerian operatic overtones, in which an effigy personifying the emotion of care —that is concern for worldly affairs— is burned. The fire frees the men, who as upstanding members of the ruling class normally worry over large financial, political, and military problems during their everyday lives, to spend their special week outdoors at the Grove without worry for their empires in the world outside. The ceremonial cremation, carried out by dark figures in flowing mysterious robes, occurs beneath a massive stone owl statue and is probably the single biggest reason for the proliferation of conspiracy theories “revealing” the Grove’s occult or Illuminati masters, space reptilians, Bilderberg Nazis, etc.

The Bohemian Grove Action Network and its Occupy allies are organizing a “Creation of Care” ceremony in the nearby town of Monte Rio on the same day the Bohemian Club will torch care, July 15. “We’ll be featuring North Coast activists from our communities who are creating care every day by fighting for social justice,” said Moore. “Also speaking at our ceremony will be Cindy Sheehan, a delegation of Fukushima mothers fighting against nuclear power, and Code Pink activists researching the drone industry.”

The connection to nuclear power, and drones, points out Moore, makes some sense. “The Bohemian Grove Action Network was originally an anti-nuclear group,” she explained. “We researched who was making money off nuclear weapons and realized a lot the them were meeting here at the Bohemian Grove.” During the 1980s and 1990s numerous CEOs and directors of weapons manufacturing companies like Lockheed Martin were frequent attendees of the camp. It wouldn’t be unusual if among this year’s attendees was an executive or two from General Atomics or Boeing: both companies build drone weapons.

When the jinks, esoteric ceremonies, and political lectures are over, one the truth about the Bohemian Grove emerges above all: it’s mostly a river-side romp where billionaires and presidential material can embrace their manliness in the shade of thousand year old sequoias that will absorb their urine in a an ancient ritual of male bonding. It’s a rich boys club.

In 1981, just before Bohemian Club member Ronald Reagan headed to Washington for his first term in the White House, just months before he’d appoint his dream team of Bechtel Corporation executives George Shultz and Caspar Weinberger to lead the Departments of State and Defense (Shultz and Weinberger also being Club members), the Bohemian Club won a court case near and dear to the organization’s most sacred purpose; A federal judge found that the Club did not have to hire female employees. According to a New York Times report, “in citing the ‘legitimate defense,’ the judge noted that at the retreat men ”urinate in the open without even the use of rudimentary toilet facilities” that are available on the grounds. The presence of women at the Grove, he said, would ‘alter the behavior of the members.’“

The Bohemian Club did not return phone calls for this article.
Posted by Cindy Sheehan's Soapbox at 10:26:00 AM